Continuing from my post on Favorite Gen 1 and Favorite Gen 2 Pokémon, let’s look at my favorite creature designs from Generation 3 and explain a little bit about why I like them. 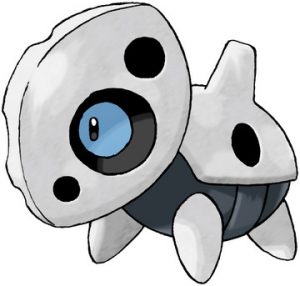 Nubs! This Pokémon’s name always made me snort because it just sounds like a normal human dude name. Aron is absolutely adorable, and they’re described as something of a pest due to their habit of eating metal, like railroad tracks. I particularly love that it isn’t obviously any type of animal – it’s bug-like, it’s dinosaur-like, and it’s also inorganic. I love how the head is almost the same size and shape as the body. Those little bright blue eyes in those dark skull-like sockets add a touch of personality and color. 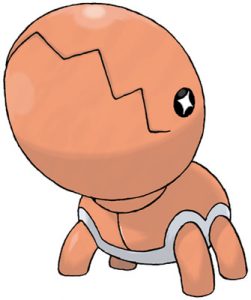 Another weirdly inorganic/bug/dinosaur! Trapinch has delightfully anime eyes, looking like it constantly has just noticed its favorite food, which it probably has. Trapinch burrows in the sand and lies in wait, with its mouth wide open, for prey to fall in. Imagine stepping in a small hole and suddenly a living bear trap clamps around your foot?! I love things that are goofy and horrifying at the same time. Trapinch borders on “robotic” in its design, especially that very insectoid segmented torso and the very smooth, shiny, tubular legs. Honestly, it comes down to that zig-zag mouth, which have long been one of my favorite qualities of goofy mouth-based monsters. 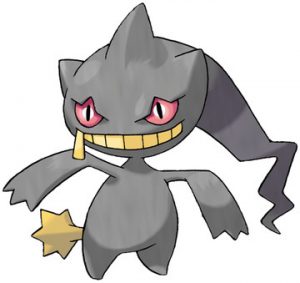 I’m always a sucker for Ghost types. Bannette is supposedly a discarded child’s toy doll that now seeks vengeance on the person who abandoned it. Try THAT on for size, Toy Story! My only issue with that: when the doll becomes a Banette, does it always change into this black ghoul design? Or does every Banette look different, like the original toy? Do toy manufacturers deliberately avoid making dolls that resemble anything scary, to try and prevent them from becoming a Banette? Does there need to be explicit malice in the toy’s abandonment, or is there a suggestion that all toys are sentient and capable of feeling neglect? Agh! Dozens of questions aside, I love the zipper mouth and floppy sock-head and the way the hands resemble over-sized sleeves. I don’t, however, love that weird little brushy tail, because it looks like a cartoon fart. 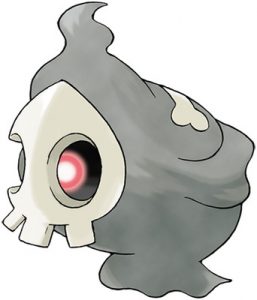 Told you I love Ghost types. Duskull is an adorable interpretation of the Grim Reaper, looking more like a small child’s Halloween costume than an actual specter. I love the single eye that floats behind the skull mask, which feels like a reference to orbs (the ghost photography phenomenon). I am on the fence about the two bone designs on the back – on one hand, they’re cute as heck, and further resemble a kid’s costume, or a punk hoodie design. On the other hand, they’re clearly cartoon bones, which makes no sense in any way in the “natural” world, if Pokémon can be called natural. Overall, Duskull is adorably childlike, which adds a lot of disturbing menace to something so heavily associated with death. 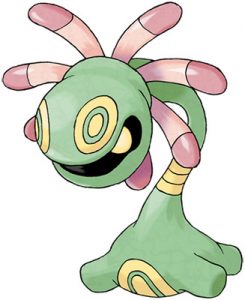 Barnacles give me the creeps. They look like demented bird beaks when retracted, and look like horrible spiders when they come out of their razor-sharp, pustule-like shells. Cradily takes my favorite aspects of cartoon carnivorous plants and puts a really cool aquatic spin on it. For a long time I read the yellow concentric circles on the head as eye patterns, and the black shape as an open mouth. It took me a while to see the yellow circles in the black shape as the actual eyes, staring out as if from a hood. Cradily has a very unique silhouette, and I am consistently impressed with Pokémon continuing to find new shapes and forms for their creatures. “Who’s That Pokémon” was honestly a brilliant way to show off how key a silhouette is to a recognizable, unique design. My only complaint about Cradily – I don’t love how flat and sharply “cut off” the nubby legs look. I think they should taper more naturally, like those hilariously phallic tentacles. 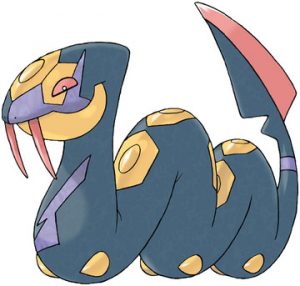 The way Seviper is scrunched up reminds me of those bouncy worm “cars” that some toddlers get. Seviper’s tail is a poisoned sword, which is awesome, and a cool re-imagining of a venomous snake. It also looks like a Mesoamerican art piece, with its angular golden designs and line-heavy, almost patchwork face. I don’t personally love the purple in this design, and would prefer just the blue-gray body with gold and red. Those little golden nubs along its belly almost read as caterpillar feet, which would explain the strangely scrunched posture – is this not actually a snake, but rather a snake-like venomous bug? Pokémon without evolutions are interesting because there is no additional context for their traits – they just are what they are, take it or leave it.