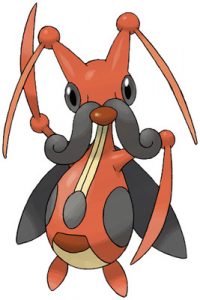 I love that this dapper little bug simultaneously looks like a musical instrument and an orchestra conductor. It’s a bit of a shame that he doesn’t have giant jumpy cricket legs, but I like that this creature focuses on the musical element of a noise-making bug. 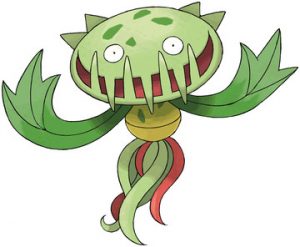 I love that we got a pitcher plant Pokemon in the form of Victreebel, but Venus fly traps are definitely the best-known carnivorous plant. Carnivine is so goofy that it loops back around to being kind of scary – those huge, almost painted-looking googly cartoon eyes over that huge, fanged smile is disarmingly, threateningly friendly. This is a creature that’s supremely delighted to eat you. I’m not sure how I feel about its little spherical body, but I do love that its legs are root/leaf-like tentacles and that the leaf-arms evoke large clawed mitts. 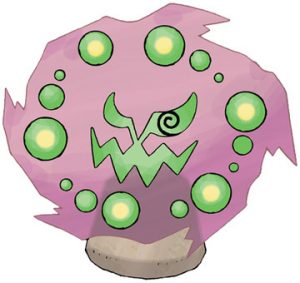 Leave it to ghost Pokémon to always introduce us to existentially terrifying concepts about the Pokémon world. Spiritomb is apparently made from 108 distinct spirits (human spirits?!), which is a significant number in Hinduism and Buddhism. Imagine if we could create ghost Pokémon by following the “instructions” in their Pokédex flavor text – gather 108 other ghost Pokémon and they coagulate into a Spiritomb. Okay, origins aside, I do like Spiritomb’s colors, that pink and green are really fun and I love the jack-o-lantern face with the revolving japa bead-like orbs. The rock that it’s apparently attached to is a bit weird and raises other questions – is the rock part of Spiritomb’s body? Does this mean a rock can be captured in a Pokéball? 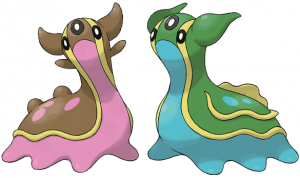 I absolutely LOVE sea slugs. They have an almost floral beauty, with colors that even a deviantART sparkledog would be jealous of. It was hard to choose between Gastrodon and its pre-evolution Shellos, but I ultimately prefer Gastrodon’s empty, circular eyes that give it a cute, dumb animal simplicity rather than a hyper-emotive cartoon expression. From the pink/brown West Sea variation, I prefer the multiple head “horns” and back nubs, while from the blue/green East Sea version, I love the colors and rippling yellow fin-stripes. I would be thrilled to see even more variations of Gastrodon, like Vivillion’s level of variety. I personally love Glaucus atlanticus, not just because it’s called the “Blue Dragon Slug” but also because it’s so surreal that it can be hard to believe it’s real. 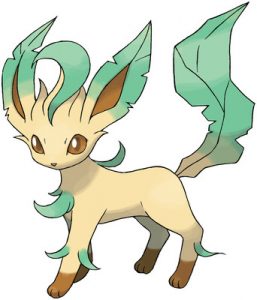 Now, I know, this is a bit lame, because everyone loves the Eeveelutions. Leafeon’s design is just so clean, and the colors are so soft and pleasant, that I find I can’t stop looking at it. That cream-green ombre reads as natural without coming across as either dirty or forced. I also love the contrast between the angular, notched leaves of the ears and tail and the curly green wisps off the head, legs, and chest. The leaves also smoothly emerge from the animal body, as opposed to other Pokémon who have plants “stapled on” to their bodies with no clear joinery or transition.