I love creature design, and few creatures are as famous and well-recognized as Pokémon.

I played Pokémon Blue on an original black-and-white GameBoy when I was a kid, and transferred my creatures forward to Pokémon Silver when it came out. I was heartbroken to learn that Silver and Gold were notorious for losing all save data after a long period of inactivity (which, to my understanding, is what sparked the release of SoulSilver and HeartGold), which meant that my very first Pokémon, a Venosaur not-so-creatively named “Viney” was lost to me forever, along with a then-ultra-rare shiny Golbat.

Here are my favorite Pokémon from Generation 1 in terms of design, creativity, and overall aesthetics. 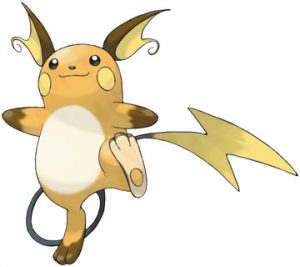 Raichu is the evolution of the iconic Pikachu, an electric mouse-based Pokémon with a doughy, hamster-like body, cat-like paws, and useless nubby forearms. I greatly prefer Raichu’s yellow cheeks to Pikachu’s rather out-of-place red, and I just love the overall naturalistic color scheme on this fantastical mouse. The massive lightning bolt on the wire-thin tail and the swirls on the ears are an interesting line shape parallel. Lt. Surge was my favorite Red/Blue gym leader, and while I didn’t care for his accent in the anime dub, I loved Raichu’s serious-but-cute growling voice. 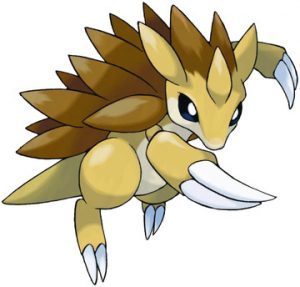 Sandslash evolves from Sandshrew, a ground-type Pokémon that honestly looks way more like an armadillo than a shrew. Sandslash is almost like a pangolin mixed with a hedgehog, with an adorable “I’m trying so hard to look scary” baby dinosaur face. I like the chitinous joints suggested by the “hands”, and the way both the feet and hands have those two big digging/weapon claws. The colors are also appropriately naturalistic for a creature that lives burrowed in sandy, rocky areas. 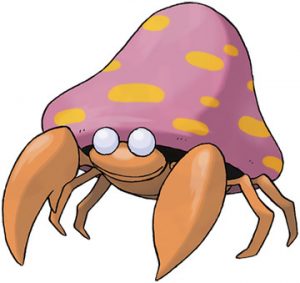 Ambulatory fungi are typically human-shaped, but Parasect is some kind of crab-ant hybrid, with only two legs on each side plus lobster-like claws.  Those pure white, pupil-less, undead eyes are easily my favorite feature. I could be convinced that the mushroom on its back is actually just a patterned carapace, but the Pokédex entires on Parasect confirm that Paras’ parasitic mushrooms have completely taken it over and are now controlling the crab-bug like a cordyceps to an ant. It’s literally a zombie. How dark is that? Imagine this undead mushroom-zombie-crab-bug scuttling out from a dark place at you? 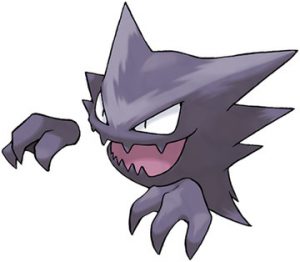 Sorry, gosh, you’re gonna have to read me gushing about ghost Pokémon a lot. Haunter is honestly one of my top choices for favorite Pokémon ever. I simply love the levitating clawed hands, the ambiguous ear/horn-like head spikes, and the teeth on the outside of the mouth. It feels appropriately like a simplification of ANY mammal-like or dinosaur-like Pokémon, while also being its own unique creature. I adore Haunter’s croaky mischievous laugh in the anime and tendency towards licking things with its oversized paralytic tongue. 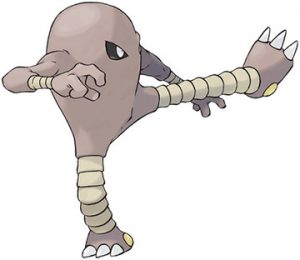 I don’t typically like the designs of Fighting-type Pokemon – they’re usually some variation of Weird Human with Clothes. But just look at this bizarre creature, because I really can’t say there are many other Pokémon like it. Hitmonlee has organic spring-loaded accordion legs, but more importantly, NO HEAD. It’s got NO HEAD! It just has eyes on a rounded torso! And mean little black-sclera eyes at that! Where’s its mouth? How does it eat? I could see myself being terrified out of my mind if I saw one of these things walking towards me in a dark alleyway or forest. What environment is this sort of creature even suited for? It’s just so surreal. 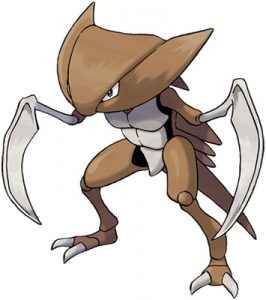 I had a hard time deciding between Scyther and Kabutops, because I love bone-pick raptorial arthropod legs (listen, I was a Jhonen Vasquez kid in middle school). I love that the head of the Kabutops is almost an entire horseshoe crab, which really makes me think about how to anthropomorphize other crustaceans. It also really carries that Xenomorph alien vibe which we already get from deep-sea life. 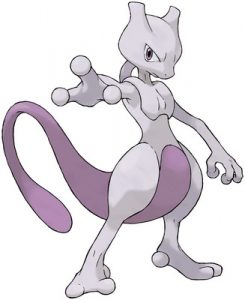 I promised myself that I would try to keep Legendary Pokémon out of these as much as possible, because it’s not really a “species design” if it’s just a singular creature, is it? I love that Mewtwo is clearly alien, but not in any of the traditional ways. We’re used to things like Kabutops up there, with bug-like segments or maybe tentacles for legs. But Mewtwo manages to be completely alien and bizarre while being fleshy and almost cat-like. I love the way the tail joins with the pear-shaped hips – it almost looks like a separate component that could detach, or was attached afterwards. The bizarre “pectorals” look like a crushed and misshapen version of a human chest. The fingers and toes are weird rounded E.T. bulbs. And that organic tube leading into the neck is the best part. We’ve seen the lab that Mewtwo was grown in, created from manipulating the genetic code of Mew, but there are still so many questions. Was Mewtwo spliced with a human? Was its design unstable, forcing the scientists to attach pieces – is there man-made tubing or medical supports inside of its body? Mewtwo is a total jerk, but the first Pokémon movie certainly brought me to tears, and it still decided to be a brooding supervillain in its Dracula lair even after learning about the power of love, which I can absolutely relate to.