Continuing from my post on Favorite Generation 1 Pokémon, here are my favorite creatures from Generation 2 and my review on their design elements. 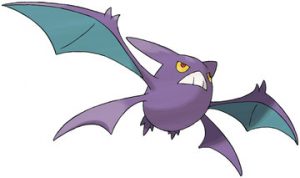 This furious little purple demon is the final form of the blind, obnoxious Zubat, though I always thought it looked more like an alternative to the huge-mouthed Golbat. I mean, imagine if your Zubat evolved into Crobat only if its Speed was higher than Strength, otherwise you’d end up with Golbat… anyway. Apparently Crobat is still a blood-drinker, but now a silent, faster vampire with two sets of wings that it can use simultaneously or alternating. Crobat doesn’t have proper legs, even though those rear fur tufts almost look like feet, and so it turns into an awkward crawling sphere when it needs to land, which must really ruin its menacing image. I don’t look at this animal and think “vampire”, though, so I wish it had some fangs or even a creepy insect proboscis. 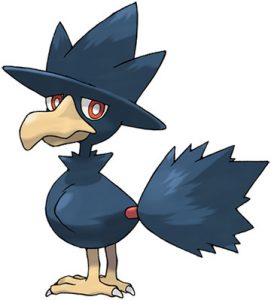 Witch-cats are all well and good, but how often do you see witch-crows? Not only does Murkrow have an obviously witchy “hat” shape made of feathers, but the tail is also evocative of a broom. I don’t love the inorganic, perfect circle that makes the “brim” of the hat, and I feel as though that could have been done more subtly. Witch familiars, or witches in animal shape, used to classically have deformities or missing limbs. I would have loved to see either some asymmetry, or even cat-like features added to make Murkrow further distanced from normal crows. 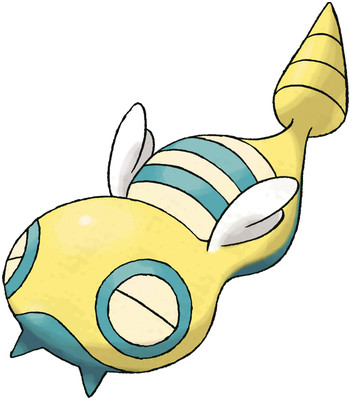 Dunsparce is based on the mythical tsuchinoko, a snake with a middle thicker than its head or tail. Dunsparce is infinitely cuter and more innocent-looking than the classic art of this cryptid, and incorporates pieces of the cryptid’s behavior into its design. For example, the tsuchinoko is said to be venomous, so Dunsparce has a conical arrowhead “stinger”. The tsuchinoko is also said to be able to leap and hover, so Dunsparce has tiny nubby wings. I love how Dunsparce also evokes a sea slug, with those “fangs” that look more like oral tentacles. The tsuchinoko is also rumored to have a taste for alcohol, which might explain Dunsparce’s chill, sleepy expression. Overall, one of my favorite interpretations of an existing folklore creature into something with great design elements that actually make sense and suit the creature’s behaviors. Oh, and also I love the colors – also very sea sluggy, with a hint of painted Easter egg. 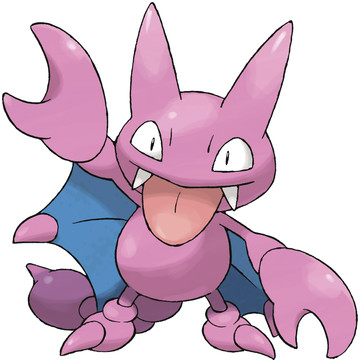 This adorable monstrosity so clearly screams of Studio Ghibli, or Wario Ware, or even Hello Kitty; any adorable cartoon depiction of a Japanese folklore monster. I would love it if those head-spikes were clearly horns OR earns, and it it had more than one silly little toe, but I also understand how those add to the gremlin-like mischievousness. I really love the extra “claw” on the wing flaps. 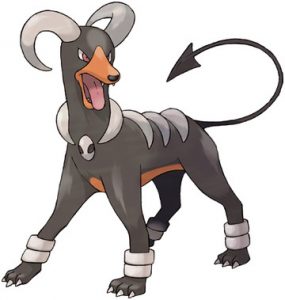 I’m really sorry for being a predictable Goth Kid. Houndoom is a hellhound based on a Dobermann, which are stereotyped as aggressive “police dogs”. I’m always a sucker for external bones, and I wish Houndoom’s were a little more realistic. I could also do without that awkward little Invader Zim skull face on the chest. I actually like the “bangles” around the ankles, which help add weight to the creature, and I’d love to see those around the tail as well. It may be more appropriate if the brown were adjusted to a red or orange, to help reinforce the fire typing and move it away from being just a Dobermann with some scary demon bones attached. There’s something fun to the idea of this creature being a Dobermann with a literal Lucifer complex – everyone kept assuming it was a mean, nasty dog, and so it became a mean, nasty demon dog. Dobermann’s usually have their ears and tails docked, which can be very cruel to the animal, and I like the idea of it re-growing the horns and devil tail to replace its stolen parts.