So I only recently learned about Prodigy, but it appears to be a math-based educational game that actually features interesting story and artwork. It has a Pokemon-style pet raising, battling, and evolution system, and all of the pets have an elemental alignment. Nothing too unique, but the art and creature designs definitely captured my attention.

As I started exploring their Wiki, I realized that a lot of the art I was drawn to was actually for the OLD pet designs, and that they had been updated and replaced with NEW art and designs since. So in this article I am including both the old and new art – the OLD art will always be shown first, and the NEW art will be shown second.

The Gnawdy/Crookfang will illustrate a common theme with the old versus new Prodigy creature designs. The old designs are more copy-and-paste, with lazy variations between the evolutions, but they have a much more unique style and more personality in my opinion. The new art communicates the idea of each creature’s evolutions way better and helps make each evolution distinct, but they are overall less creative, more simplified, more generic, and honestly, more like knock-off Pokemon.

The old Gnawdy/Crookfang is an energetic, piratical shark-man, and there’s something about those big, dark-lined almond eyes and slightly-parted mouth that conveys so much more personality than an angry fish. The colors are also much more muted and interesting in the old art, more realistic and provide higher contrast for focal points, than that bright primary blue and vibrant purple. The focus get lost when everything is equally saturated. 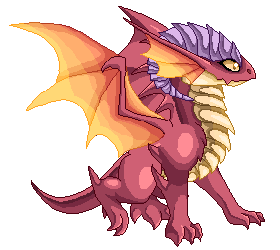 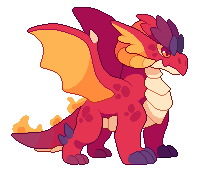 It’s a classic fire dragon, but it starts off as a mythological fire salamander! Now, I do think the new art for the Burnewt line communicates their idea better: a pathetic, dorky little salamander that slowly evolves into a majestic dragon, each phase growing new limbs and adding intelligence to the expression. But I cannot get over how unnique and intense the old final evolution is – again, those big, dark-lined almond eyes are just so striking and unique, and it has the quality of a curious but dangerous cat. In making everything more “kid-friendly” they definitely removed many of the sharp edges and interesting lines of the old art. It’s almost like they are concerned about kids hurting themselves on the sharp lines… in digital creature artwork? 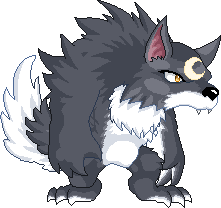 A werewolf, of course. Another idea that is communicated much better in the newer art, but is simply less cool and interesting. It’s wonderful how distinct all of these poses are, and it’s ironically funny that it goes from being a literal quadrupedal puppy to a gangly teen werewolf and then back to four-legged. Honestly, though, I really miss the crescent moon symbol on the forehead.

A celestial…. thing. What is it? This pet has yet to receive an art update, and I love how abstract and strange it is. Does it have a mouth? Which of those limbs are legs versus raptorial pincers versus wings? It really does convey a space-dwelling alien or magical creature. The first form is entirely forgettable, unfortunately, and doesn’t seem to bear any relation to the next two forms. The final two forms are clearly a “day” and “night” version of each other, and thankfully they have subtle feature differences instead of just a recolor. 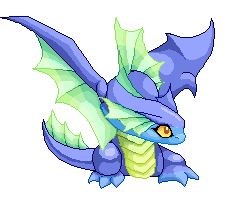 Another dragon, but this one is more magic based and fae-like. Unfortunately, this pet is no longer available in the game, so we are unlikely to ever see an art update for it. Similar to the Burnewt line, this is a harmless blob-creature that slowly evolves into a majestic dragon (maybe these creatures are more like Digimon than Pokemon?) 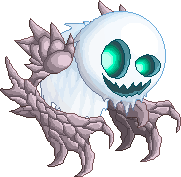 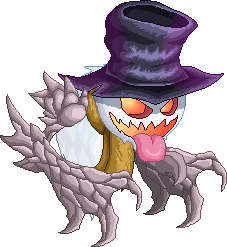 So the art update on this pet is a real shame. This thing was originally a snowman ghost that gets progressively more Halloweeny as it evolves. Snowman ghost! The only thing even slightly improved in the new designs is the inclusion of the melted “vent” mouth and those very wonderfully colored ice claws, but otherwise, it is a HUGE downgrade from the old art. I simply cannot forgive the loss of this Jack Skellington pumpkin-head snowman monster. I guess it was probably too creepy for kids? Ugh. I suppose I do like the mischievous eyes of the new Tempest, but I can’t stand the big shapeless snow beard of the new Flurrious. 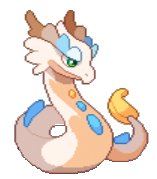 Another frustrating downgrade. The original is a completely gorgeous winged serpent with those almond eyes I love so much; I don’t really understand how they are evolutions of one another, when the white version simply looks like a different variation. The new art does communicate an evolution to a larger, more powerful state better, and the brown/cream/blue colors of the new Prodraxis are quite delightful, but I wish they’d given the new Prodraxis its wings back. Y’know what I think it is? The old art feels more like an animal, instead of a cartoon anthro.

No longer available, this very Skylanders-esque purple dragon was a super-rare, super valuable “epic” pet that was highly coveted. I mean, it looks great, and I can see how it would be so desirable – it’s a a buff, snarky-looking, edgy dragon with crescent moons all over its body. It has an excellent, almost Dreamworks face design, and the colors are fantastically balanced. Yeah, it’s a cool pet. I would love to see de-evolutions of it, like with the Burnewt line. 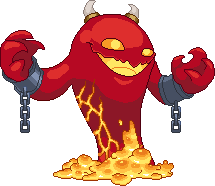 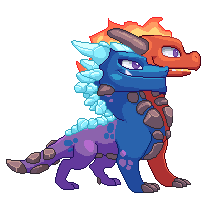 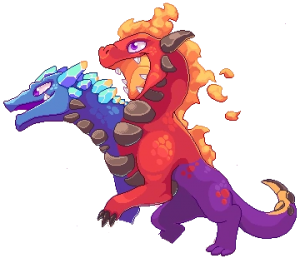 I don’t normally care much for multi-headed dragons. I guess they always raise questions for me – how do they not fight? How do they share control of the body? Chill & Char may be predictable and uninspired, but I honestly love the design and find it to be one of the best depictions of a multi-headed dragon that I’ve seen. The purple rear-end, marrying the colors of red and blue that make up each head, is a wonderful way to communicate the shared body. The brown stones help add a thread of commonality to the design. I like that the heads have distinct snouts and horns, and as silly as it may seem, I like that the ice head is the serious and badass one while the fire head is the playful and goofy one. I’m so done with ‘fire’ meaning ‘leader’ or ‘hero’ or ‘protagonist’. 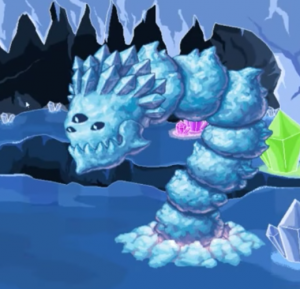 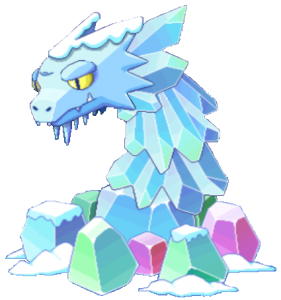 So this creature is NOT a pet, it’s actually a boss monster that can never be tamed. But oh MAN, look at the old art design! Look how terrifying that three-eyed, soulless, insect-jawed old design is! Even though I love dragons and dragon-like creatures, it is such a shame to see this obvious MONSTER get downgraded to a grumpy Snowager knockoff. Perhaps this was another case of the original monster being ‘too scary’ for kids? I would argue that the new design is too sympathetic and sentient-looking for kids; when so many of your pets are similar creatures, doesn’t it feel wrong to battle this sulky snow reptile? You’re the one breaking into his home, after all.