Given the popularity of Minecraft, I am shocked to find that very few people have ever heard of, let alone played, Manyland.

Manyland is a free-to-play, simple but surprisingly robust, browser-based side-scrolling game that allows players to create limited-palette pixel art objects and build custom worlds. Every area, including the overworld, claims to be infinite. You can travel left, right, up, or down for literal hours. The game is set up for side-scrolling platforming, but many people simply build open exploration worlds without any particular platforming or enemy-dodging challenges.

Manyland requires no downloads, and can even be played without an account – you’re simply assigned a random “Explorer #” if you’re an unregistered guest and you can immediately run and jump around any world. There is a single massive overworld area, or “main map”, but users can also create as many custom areas as they desire. Finding those custom user areas, especially the really good ones, however, can be a challenge if there aren’t obvious portals around the central main map.

You can “die” in Manyland, either from enemy/environment damage or falling from too high-up, but “death” simply means you respawn somewhere in the same area – there aren’t lives or any real punishments except for losing your previous position in the map.

Directly within the browser, you can use built-in pixel art tools to create objects and immediately place them in the overworld. These objects can be simple solid blocks, animated water, consumable handheld items, talking scripted NPCs, and even weather or atmospheric effects. It can take a while to learn how to make each of these types of objects, and the built-in scripting language is rather clunky and hard to learn.

And y’know what’s REALLY cool about the item creation tools? It’s INSTANT. You don’t have to upload or wait for approval for your objects. As SOON as you create something, you can immediately drop it into the editable parts of the main area, or directly into your own area. Using right and left mouse-clicks and a few simply keyboard commands (which are FRUSTRATINGLY hard to find, by the way) you can draw with your mouse cursor and then immediately drop the object into the world.

It’s amazing how easy it is to create objects. You can literally sculpt a world from nothing. But also – you can collect objects that someone else has made, as long as you can actually FIND it first, either in the main area or someone’s custom area. Once you’ve collected an object, you can use it in your own areas. You cannot edit or rename objects that someone else made, nor can you screenshot-and-paste in data, so it’s actually really difficult to “steal” someone else’s art and claim it as your own.

Speaking of that main area, let’s take a look at that. 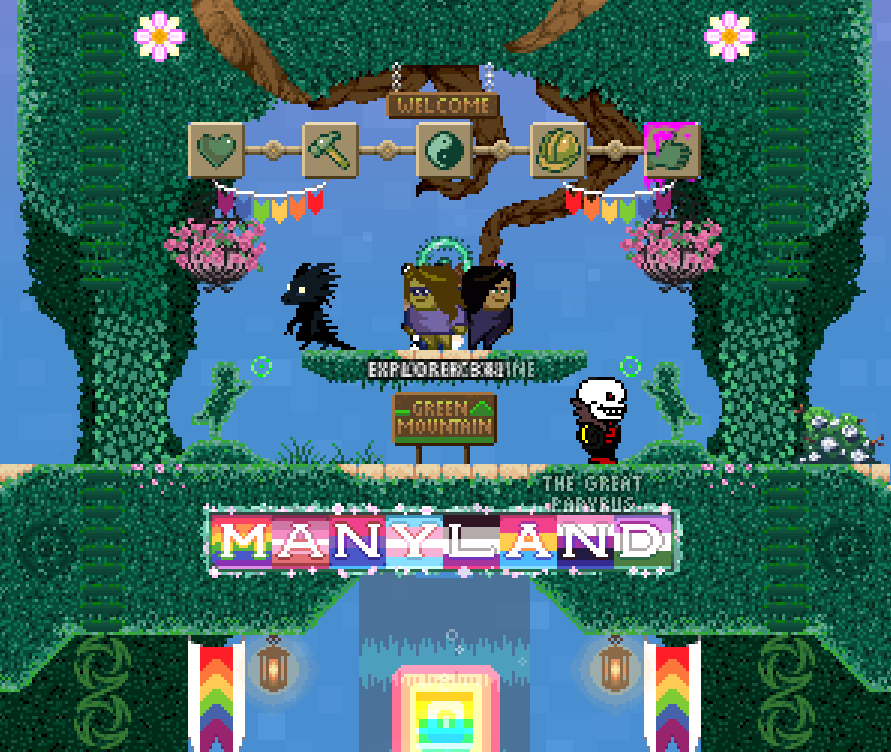 When you first load up Manyland, things start off fine. The center, Green Mountain, is well-curated and regularly changes with the seasons and current events. Normal players cannot affect anything here – except for their own skin (and yeah, you do occasionally see inappropriate skins).

As you get further from the center, the cohesion starts to… fall apart a bit. People can freely place objects here, but the solid walls and floors are typically fixed in place. 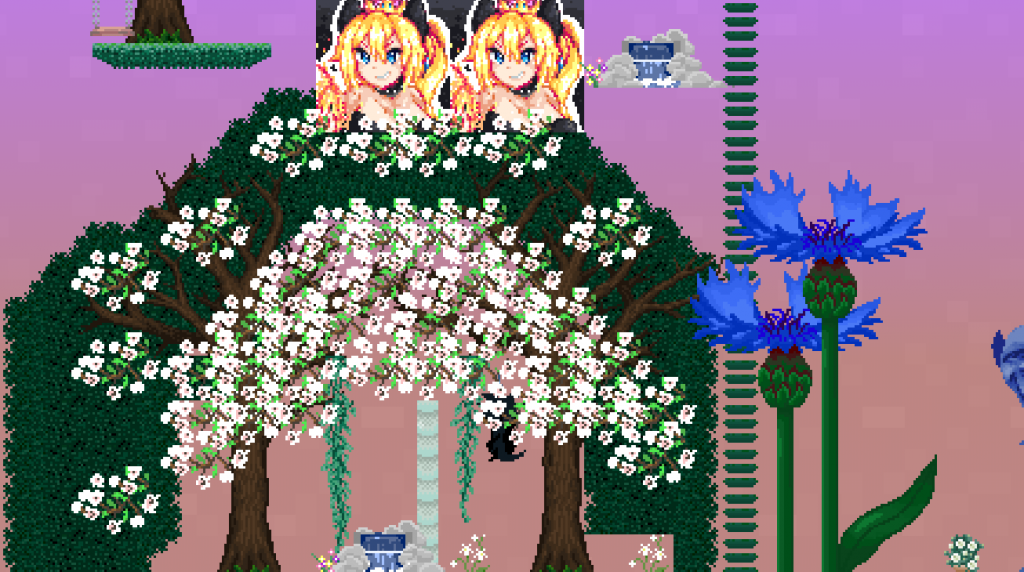 The farther you get, the fewer stable walking platforms there are. You start to see objects spammed. Sometimes you’ll find an enclosed room that someone has built, trying to create an oasis in the chaos. I suspect that many younger players don’t understand that they can create their OWN entire area, so they find a quiet corner of the main map and try to build a house there. 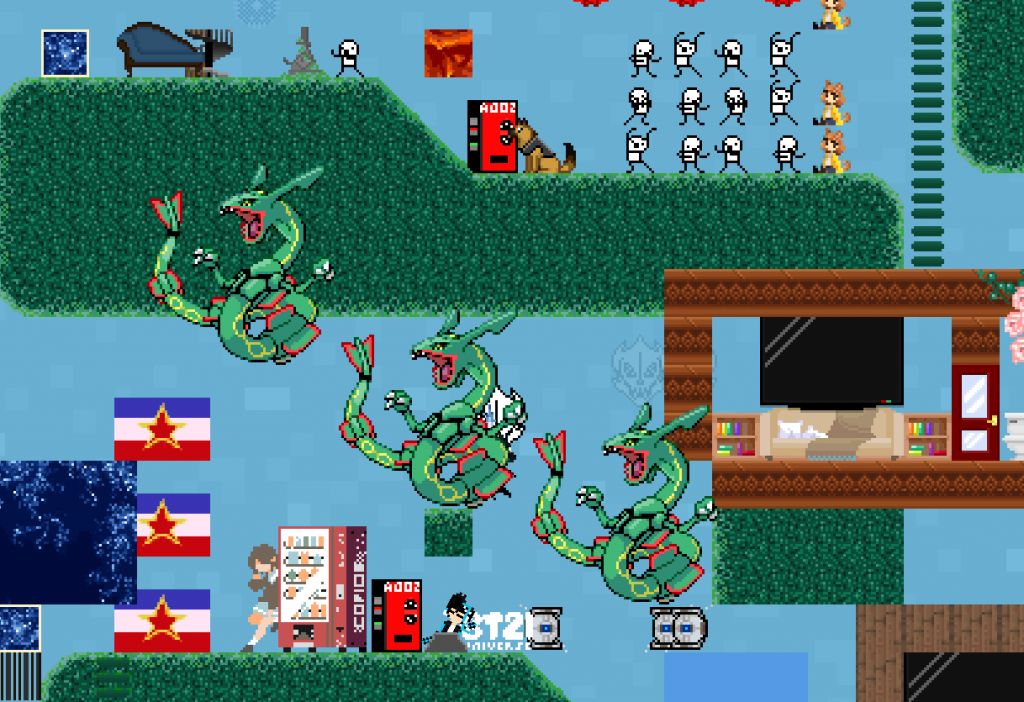 And then eventually you get to complete and utter madness. There are no rules this far from the center. This is wilder than the Wild West. You will see objects spammed dozens of times, objects that teleport you, objects that push you around, ladders to nowhere, invisible walls, and epileptic light shows that take up the entire screen. 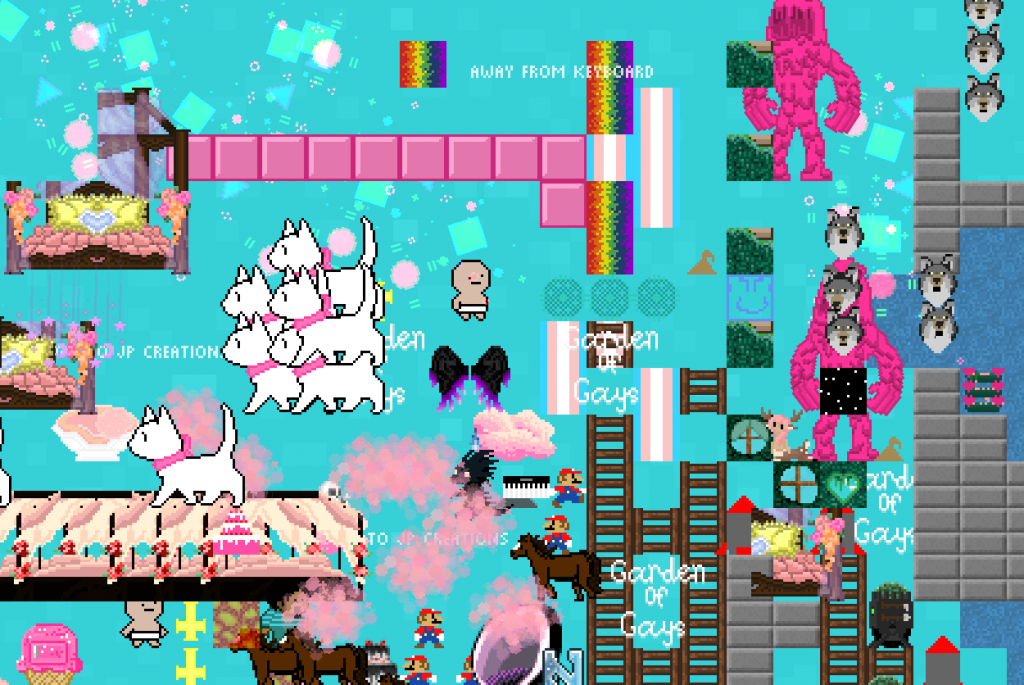 So there’s the first major issue with Manyland: moderation. There… isn’t any.

Here is the second: there is no directory of areas you can visit, so someone had to make a 3rd-party solution. ManyUnity was created by players as a directory of areas, and allows logged-in members to vote for their favorite locations. It’s under-used and still doesn’t help you find new, undiscovered, high-quality areas.

Too many basic functions are obscure and arcane. For example, there is no easy way to reset your location within any given area. The only real way to put yourself back at the “start” of any area is to die twice in rapid succession, prompting a browser pop-up to say “OUCH, THAT WAS QUICK! DO YOU WANT TO RESET YOUR LOCATION HERE?” Also, there are some typed commands that appear as normal spoken text, but they have special functions – “to 3”, for example, is the way to return to the main/center start area, but it gets said aloud like normal text. There is no “silent speech prefix” for commands.

But this good stuff is surprisingly hard to find. Instead, I could spend an hour wandering the outskirts of the center and come across… well… stuff like this: 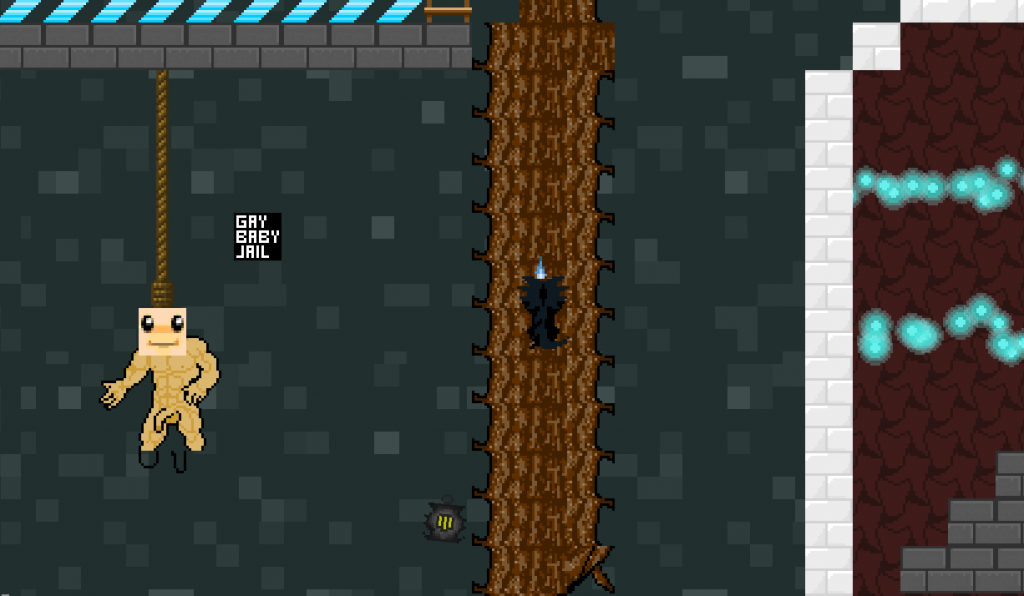 My personal area, filled with my favorite objects that I’ve collected from around Manyland and places that I aesthetically like. 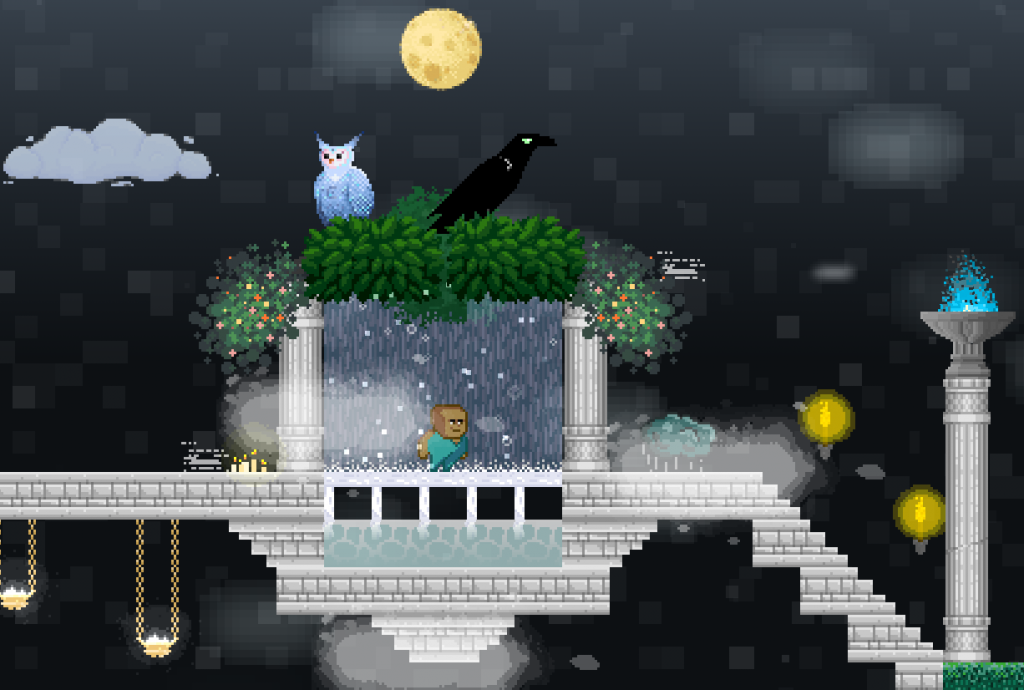 My WIP attempt to create a platforming and enemy-filled challenge area, set in a ruined castle during a supernatural rainstorm. 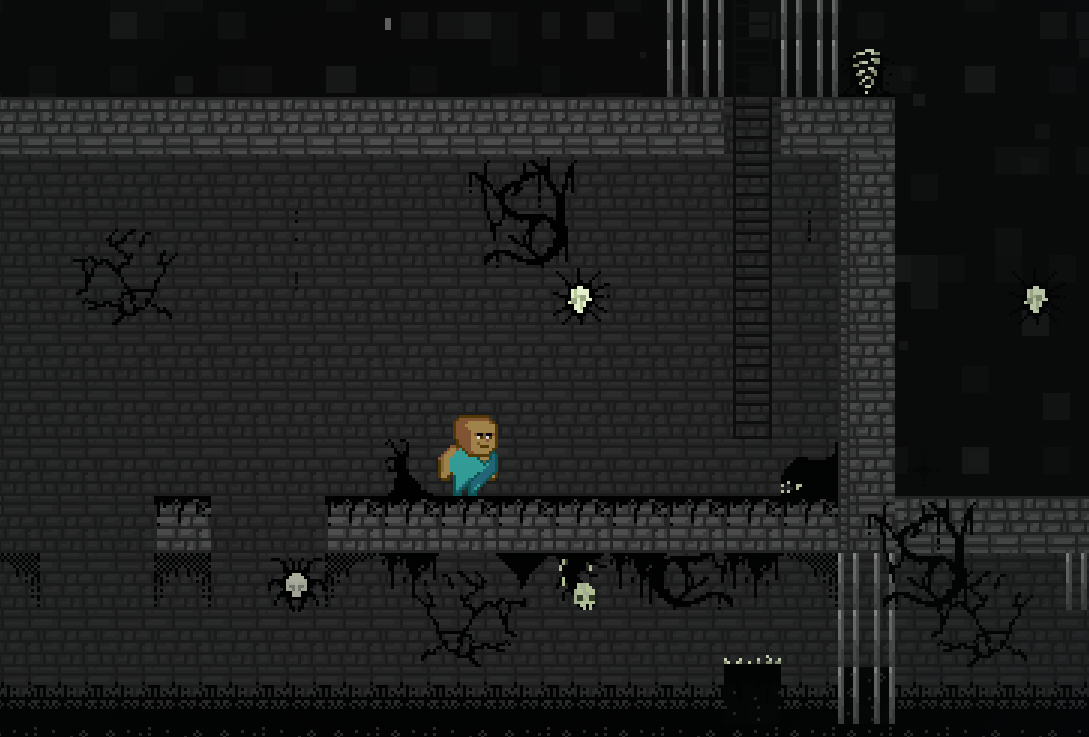 I cannot recommend this place enough. This area is a BEAUTIFUL, highly varied, interesting and super thoroughly-made surreal/horror exploration area. This is my major area of inspiration on Manyland.