For the better part of my entire 2000’s, I was absolutely, utterly, and completely obsessed with a furry graphical social game called Furcadia. 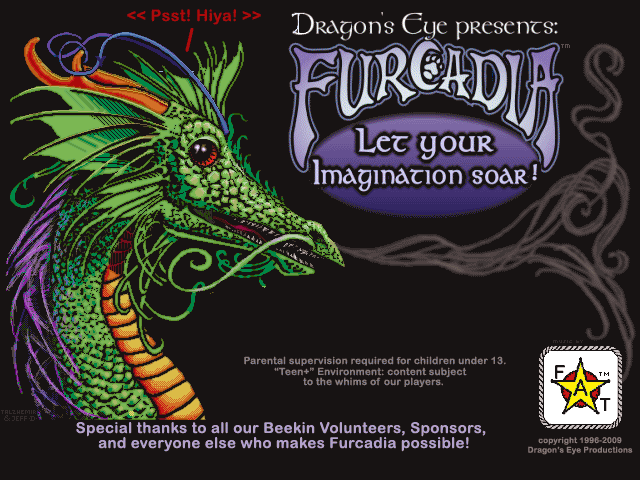 Furcadia isn’t really a “game” – there’s no stats, no goals, no HP or leveling, no win or loss conditions. It’s purely social – all you can do is walk, sit, lie down, and talk to each other.

At time of writing, Furcadia is considered “dead” by many fans. Many players believe the staff are never going to continue updating it, beyond adding more premium avatars for profit. They had a monumentally successful Kickstarter that earned them over $100,000 USD, and yet very few of the promised updates and improvements have been delivered. Worse still, the player base is continually shrinking, with no added incentive for new players to come in, and very few reasons for the nostalgic old players to stick around.

But I’m not here to be yet another Furcadian grim reaper foretelling the inevitable doom of this game. There’s plenty of articles like that out there already. I want to tell you a little bit about how Furcadia influenced me as a young artist and creator, and give you a glimpse into Furcadia’s glory days. And maybe, if it strikes your interest, you could be one of the rare new players to try and re-invigorate this amazing creative platform.

Furcadia’s major appeal, besides being a furry game, is the ability to create custom worlds/private chat rooms called Dreams. Creating a Dream is called Dreamweaving.  These custom worlds are, even to my standards today, an incredibly powerful and accessible creative medium. The Furcadia game download includes all the tools you need to create the map, script, and artwork for Dreams. Their custom scripting language, DragonSpeak, is incredibly easy-to-use, and I would have never learned any object-oriented programming without my introduction to DragonSpeak first.

The Dream Editor is also fun to use. The whole game is on an isometric grid; there is no “up” and “down”, but you can fake the appearance of 2-story rooms simply by placing walls and floors in the right way. Dream building can be done with careful planning and measurements or completely artistically. I would often bounce back and forth between the world editor and the art program to create things as I found a need for them. There is such an instant gratification in drawing a new object and then immediately being able to place it within a functioning world.

What’s awesome about custom Dreams is that you can literally replace EVERYTHING, if you so desire. Many Dreams leave the default player avatars, game skin, and at least some of the main world assets, but you could theoretically replace EVERY object, player avatar, the entire game UI, and make a custom world that’s almost unrecognizable as the same as the main maps.

There are a handful of global main maps that each have an intended theme or level of RP – Imaginarium for “serious roleplay”, FurN for adult roleplay, and Allegria Island, the catch-all for “just for fun” areas. Allegria and FurN have always overwhelmingly been the most popular, with the most Dream portals dotted around the map, leading to various player creations. Back in the 2005-2006 peak era, the best upload spots in the highest traffic areas were hotly contested. People would even create scripted bots to guard their Dream upload spots.

There were tons of third party plugins and applications to enhance your experience. Furnarchy was an add-on that added a ton of features to the game, my favorite of which was “fly”, which allowed you to move the camera independently from your character and explore an entire Dream, even the hidden stuff. Furbot was another that let you create automated bot characters who could perform actions or even respond to requests automatically. Because Dreams are named after your character’s name, people often created characters that were just meant to be uploaders – the character’s actual name would be something like “The Club” so that the Dream could be called this on the portal. This character would often be turned into a Furbot and scripted to automatically summon people who requested to go to the Dream, as there wasn’t a good way to find a desired portal.

There are a few major flaws with the Dreamweaving process:

“Patches” are Furcadia’s custom “mods” that can be applied to your Dream world. Patches can include floors, walls, objects, player skins, player icons, the game skin/UI itself, the menu buttons, even the smileys/emoticons. Furcadia made adding patches to your custom Dreams easy to a certain degree, as long as you know how to move files around your computer.

During most of my time on Furcadia, the game had an incredibly limited color palette. Check this out:

That’s it. Every color available in the entire game. You had to use old pixel art tricks like dithering (creating a “chess” pattern) to blend and cleverly use the available colors to create everything from plants to machinery.

As of the Second Dreaming update, this has been updated to a full 32-bit color palette – which is honestly as intimidating as it is liberating.

This was long before I had anything remotely akin to a drawing tablet, so everything I drew was with mouse clicks. Pixel-by-pixel on an isometric grid, click-click-click.

You can see how clumsy that weird shiny pillowy shading is. Pixel art was an excellent way to learn about value and viewing your art from a distance. Many of these objects are less than 50×50 pixels, meaning I had to learn to carefully pick every individual pixel.

The sheer volume of art I created for Furcadia is honestly staggering. Even while going through my archives for this article, I couldn’t believe how many hours of work this represented, and I know there’s even more that is now long lost. If you have the editors, you’re welcome to download my legacy patch collections here.

After I got a good handle on creating isometric pixel art objects, I became a Pixel Beekin – one of Furcadia’s volunteer artists. My artwork was actually in several public maps!

Here’s a messy collage of my most popular, recognizable creations, which can still be found in Furcadia dreams today:

That fluffy blue cushion in the center there – that was probably the most popular thing I EVER created. I still see that damn thing everywhere.

My first ever published Dream was called The Dragon Adoption Center. Some players would become baby dragons, while most remained the same, and the idea was for the normal furres (Furcadia’s word for “anthro animal people”) to adopt a baby dragon. There were games and activities and a cafe to bring your new pet dragon to, and later versions had customizeable caves, scavenger hunts, and complex scripted games that took me weeks of real-world development time. You could competitively race from inside a magic bubble, dig up coins, and catch crystal droplets that fell from a cave ceiling. In-world points earned could then be exchanged for special items that yielded bragging rights – special cushions that made you float, one-time-use objects that created a fancy effect, and plush toys representing staff members. All of the objects, player avatars, and environment pieces were haphazardly pulled from free patches (“patches” in Furcadia refers to custom community-made content, not game updates) available online. It was NOT a pretty place, and it was not run very well, either, with “staff” being randomly appointed from regulars and then abusing their power, or chosen from friends who didn’t actually help moderate. I definitely look back on this with equal parts cringe and fondness.

Later, I would make Shiann Jungle, a feral (y’know, normal animals, not anthros/furries) roleplay dream set in a dense rainforest, where players could claim a den as a clan of tigers or leopards. This open, sprawling map was choked with trees and foliage, and featured randomized rainfall and day/night cycles. There was very little scripting to this Dream, because it was reliant on roleplay between visitors instead of actual gameplay. I faintly recall adding some of my first custom art to this Dream – a snake player avatar, trees and plants, and rocks. I recall being proud of the randomized rainfall, which you could still hear even when you were in a cave or tree lair.

My crowning glory was a Dream called Crystal Falls Retreat, a strange mix of hotel and bar that was popular for Dreams at the time. This was when I really started making custom assets – seating cushions, floor tiles, lights, decorative doodads, potted plants, and more. Each hotel room was unique, with custom giant, round beds

Once I got really comfortable with pixel art, I made Ameri Palace, an ancient Egyptian palace that was crafted with 100% custom artwork. Everything – a dozen different palm trees, randomized sand floors, and everything needed to construct the actual temple. Now that I had notoriety as a Dreamweaver and patch artist, I was able to sell this piece of custom digital art for over $100 (that was a lot of money to me at the time).

While I don’t have a screencap of Ameri Palace, I did make this chaotic collage of the objects I created it for it, mostly just to illustrate the sheer volume of it – and this is just the objects, not the walls or floors.

Later, craving the nostalgia of Crystal Falls Retreat, I created GloWater Springs, a semi-tropical resort set atop a waterfall. This had a mix of custom and community patch assets, and I eventually sold it to another player, who is actually still running it to this day!

Somewhere lost in the mix were many other small, half-finished, or simply unpopular ideas…

Incidentally, I do actually have some Dream ideas that I’m currently – albeit slowly – working on. There’s not a ton of incentive to work on them quickly, given that Furcadia’s player base is constantly shrinking, but it’s such a fun and nostalgic medium for me that it helps me stay creative.

Things Other People Made

While no longer around, this was the standard for Dreams for a long time while I was active. This was a humble village in a jungle setting with tons of beautiful custom artwork and novel ways to use the isometric game format.

Red Meadow
A spooky feral wolf roleplay with a rich in-world lore set in an original take of the afterlife/underworld. Feral roleplay dreams are famous for being huge, open maps with lots of unique areas. 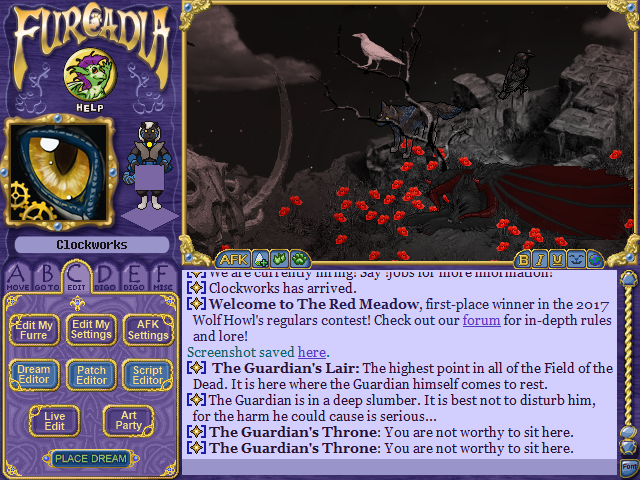 Spyro the Dragon interactive world with fully scripted games and boss fights, full custom artwork, inspired by a combination of the original and Legend of Spyro series. Players are all transformed into Spyro-style dragons and can wield breath weapons (which actually work, allowing you to torch sheep, plants, and enemies), collect gems, and work collaboratively on puzzles and tasks. 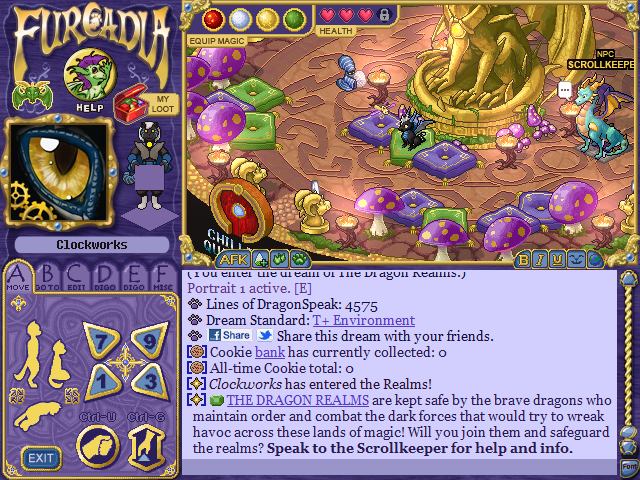 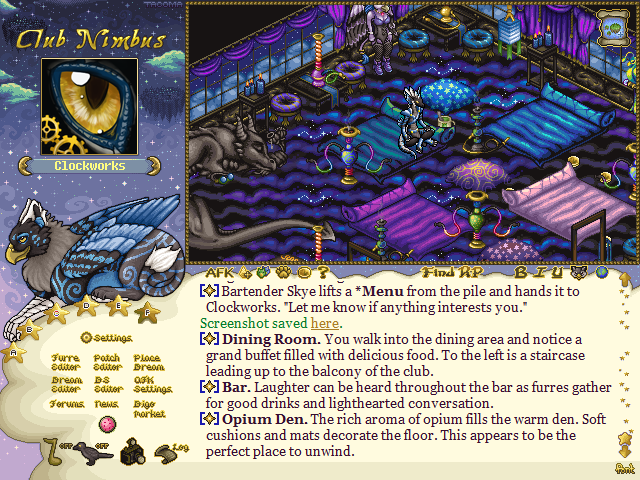 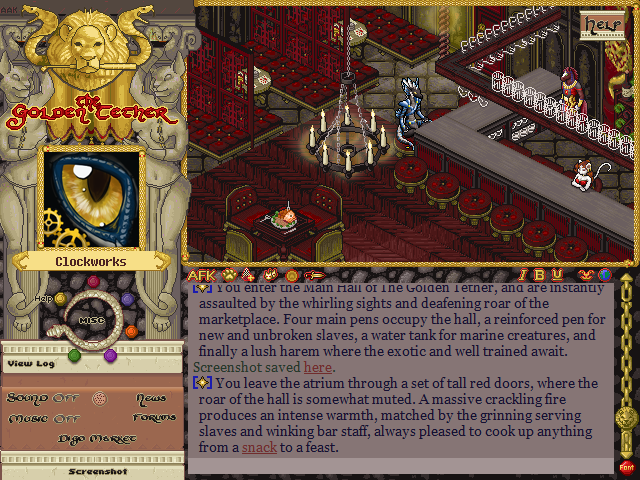 So, I guess, in conclusion, Furcadia was (and still is) a startlingly powerful medium for creating custom worlds that is unfortunately underpopulated and seemingly abandoned by its creators despite people throwing thousands of dollars at them. The only thing keeping this game alive is the dedicated player base continuing to build new things and spread the news of it.