Flight Rising is a browser-based game in which you raise, breed, and battle dragons. There are currently 16 species of dragons, with different art for the baby, male, and female versions. There are numerous patterns (“genes”) and colors for the body, wings, and all-over patterns. Let’s take a look at these dragon designs!

We’re going to start off with the four “free” dragon breeds, which you can choose from at the creation of your account. The Guardian is a heckin’ thick lad, with burly shoulders and an imposing stance. They hail from the ocean region of Flight Rising’s world, which explains the fins on their neck, jaw, and legs. While I greatly enjoy the overall sloped shape of the head, I don’t agree with the long hairy beard, especially since it is the only instance of hair on the entire design. I also find that the tail is lacking a fin or paddle that would really clarify that this is an ocean-dwelling dragon.

The Mirror is a lean, slippery-looking fella. I love the uniqueness of the head – that skull-like mask, the four eyes, the attached ear-fins. The feet are also very pleasing, and overall lends to a sense of a sneaky, quick-footed dragon. It would be cool to see more of that exoskeleton armor on other parts of the body.

The smallest dragon breed, the Fae is a delicate little guy. The head is simply adorable, but I feel as though those raised head-fins should have been one and the same with the ears, as those little rounded mouse-ears feel otherwise very out of place. The limbs feel appropriately delicate and I really enjoy the angular way it holds its neck and tail. I don’t love the teardrop-shaped “feathers” on the wing-fingers, which I imagine would create a lot of drag for this small creature.

I’m very glad Flight Rising has a furred dragon species. The horns are very unique, with that fin-like branching/webbing on the underside, but they give an aquatic impression that I think was undesired. I appreciate that the fur covers the wing-arms for insulation. Though it stands out as unique, I don’t especially love the face, which reads as distressingly human to me. I also want this guy to have huge, fluffy paws instead of those fine little clawed toes.

The Pearlcatcher is an interesting mix of Western and Eastern dragon traits. This is one of the more unique ways I’ve seen classic dragon design elements re-compiled. I really enjoy the rhinoceros-like horns on the head, and I really appreciate how the tufts of fur are echoed on the head, jaw, tail, and joints, which helps them feel deliberate and cohesive. The in-world lore around the “Pearl” is interesting, because it is barfed up after hatching and represents the dragon’s soul, but there doesn’t seem to be any benefit to this creature to carry this large orb around. Why don’t other dragons do this, in one way or another? Why do Pearlcatchers carry theirs around, which puts them one limb short for running, hunting, and fighting, instead of, say, burying it somewhere?

One of the most sexually dimorphic dragon species, the Ridgeback males boast these long spear-noses while females have a more traditional snout, much like elephant seals. I really enjoy the long, elegant neck on the somewhat stout, round body. Visually, those ridges on the wing-fingers look awesome, but I feel like they must provide little to no practical purpose and might even impede flight. The spine ridges also seem very delicate, like they would break off easily at the base. I really dislike those weird claw-scythes coming off the ankles – especially since the hind leg ones are on the bottom of the foot and not the ankle at all. Overall, a cool pointy dragon who unfortunately seems likely to stab himself a lot.

The Spiral dragon has always stood out to me as the most efficient usage of square image space. I mean, look at that composition! I like that we have a long, thin, noodley dragon that isn’t obviously Eastern. But the wings are way too small to be functional! The head also feels oversized and out of place, as if it were taken from a completely different dragon and tacked on – shouldn’t it be similarly slender, or serpentine, with head-fins to echo the many “wings”?

Look at all them face-thingies! I enjoy the Imperial as a re-imagining of the classic Chinese dragon. He has lots of whiskers like a cat, curly-swirly mane bits, and is overall quite pleasing to look at. I do think the wings are out of place, and very plain compared to the swirly, ornate rest of the beast. I want to see something evocative of those Chinese dragon branch-fire-wings or something with some curls.

This species is SO close to being my exact aesthetic. The body, or at least the underbelly, appears to be fur, but it’s somewhat unclear. I unfortunately really, really don’t like the Skydancer’s face – the eye is way too high on the brow, the brow is too flat, and while the antennae are very unique, I don’t like them on this particular dragon design. The wings are interesting, and it’s nice to see a mixture of fur and feathers on a dragon, but they feel so gnarled and fragile that it doesn’t remotely evoke the grace that the name would suggest.

Wildclaws are my personal favorite dragon species, but they don’t really seem like they belong in the same world as these other creatures, do they? Bipedal and raptorial, they’re the only dragon species with functional hands. They have no external ears, apparently, unless they’re an avian slot behind the jaw. I like the tiered horns and those beefy thighs, but I want to see more feathers in other places on the body. I can’t quite understand if the underbelly or entire body is furred, but I personally would have liked scales better, or at least some bird-like scutes on the feet.

Get it, like “Quetzalcoatl”? It’s not unusual to see “feathered serpent”-inspired dragons, but this chubby, stout, weasel-like creature is definitely different. I have several questions, though – do those wings actually work? They don’t appear to have the internal bone structure, but the tiny set on the butt does! I like the cobra hood/mane of feathers and I actually really love the face, but the swirls are confusingly inorganic and the wings feel completely impossible.

I’m sorry, I just don’t care for the Snapper. I really dislike that weird old man face, weirdly human pectorals (dragon moobs), and giant underbite chin. I’m sorry, Snapper, you deserve better than me. At the very least, the Snapper feels cohesive: the rocky spikes on the chin are echoed on the elbows and those big dopey elephant feet are appropriately stone-like as well. If there’s one saving grace, I like that alligator-like ridged tail and its symmetrical spikes.

Overall I really like the Nocturne – the unique shape of the head, and those parallel ridges down the neck and tail really work for me. I’m not sure how I feel about that delicate, wav fin under the jaw and neck – it feels out of place, this flowy, organic, curtain-like shape compared to all the angular spines. The body is too chonky to fly in my opinion, but I like that we have a dragon with “flying squirrel” patagium connected to the feet. I’m a sucker for zig-zag external teeth mouths.

When you put an environment in a creature’s name, I’m going to assume that is where it’s found. While I love the top-heavy head and neck of the Bogsneak, the lower body and especially the feet don’t seem suited to a swampy environment at all, as they’re heavy paw-like things. I could get behind this dragon being suited for swimming, like a seal or penguin, but I would want to see more aquatic traits on its body, like the tail. A gripe that I have with many of these dragons is that the wing patagium is ripped at the edges. In real flesh-winged animals like bats and sugar gliders, the edges of the wing membrane is actually the thickest part of the membrane, rolled over on itself like a folded piece of paper. If any part of the wing is going to rip, it’s going to be the thin, stretched-out parts in the middle, not the edges. I’ve seen bats with massively ripped wings that actually still have the thick outside cord-like edge of the wing intact. The “torn” look of these wings suggests a paper drink umbrella more than stretched skin.

This “Ancient Breeds” update is really exciting, because it introduces a new class of ancient dragons that are promised to defy the standard body shapes and really push the boundaries on the definition of “dragon”. Gaolers are… well, they’re kind of just cooler Tundra dragons. Honestly, I think this would have been better as an update, or mutation, or evolution, of Tundras, rather than a different species. I really love the fleshy pink paw pads on those useless little wings. I also really enjoy the strong-jawed, smooth-browed face, which lends a sense of feral power to the creature. Ancient dragons also have their own unique genes; the Gaoler has variations like larger horns, armor plating, and thicker fur. Without these special genes, though, it kind of just looks like a cooler Tundra, and my hopes are high that the other ancient breeds we will be meeting have more dramatic presence.

The second ever Ancient Breed, the Banescale is a classic spikey wyvern. I think it’s interesting that they chose NOT to give this dragon any wing-thumbs, when 5 other species have them and a dragon without proper forelimbs could probably really benefit from them. Interestingly, the Banescale also doesn’t have any thumb-like grasping toes, meaning it is completely lacking any opposable digits. Even just comparing to birds, toe arrangement is extremely important. It makes this species feel dumb – literally, like an unintelligent dragon race that is more akin to an animal than a sentient being. I do, however, enjoy the long spines down the back, and those little extra mini-wings at the wing-elbows are really unique.

Please check out Flight Rising if you like dragons! Feel free to add me as a friend – my lair is #11663, I joined way back when the game first launched to the public.

Also, making an account means you can play with the awesome Predict Morphology feature, which lets you free-play with the game’s dragon builder. 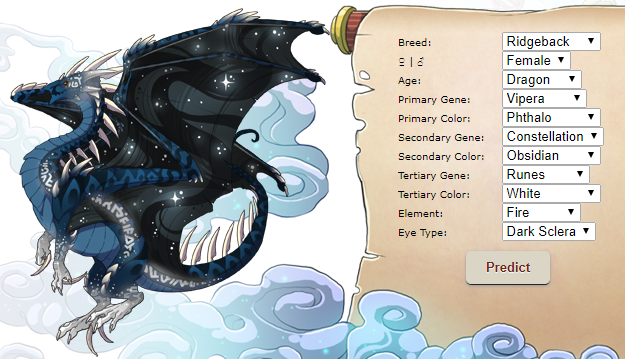