Well of Souls is a free-to-play fantasy RPG game that was launched in 1998 and tremendously popular with my gradeschool self and friends. It was the first ever indie-developed MMORPG – in order to play online with other players, someone had to be hosting the session on their own home computer using the creator’s own software called MIX. The actual history behind Well of Souls and its’ creator is fascinating – if you’re interested, check out SoberDwarf’s video on the game!

Well of Souls comes with one world, but it’s also software meant to create custom content, from your player character’s skin/appearance to entire worlds with unique monsters, items, spells, elements, quests, and areas.

I pretty much always used a skin to look like a dragon, either in my own awkward childhood art or the game’s own dragon monster art.

The default game world – Evergreen – has a weird mix of pre-rendered early 3D assets, photos that are compressed down to miserably small JPGs, and, standing in stark contrast to these,  pixel art assets. The creature and character art, mostly created by Josh Worts, was always memorable and attractive to me for its clean pixel linework and simple style that read as “cartoony” without being “childish”.

I thought I would start us off with a simple little creature that actually inspired me quite a bit as a kid. Something about the name of these little dragons, “Wrathling”, inspires so much potential – it has the power to become wrath eventually, something incredibly destructive. Plus I like the vaguely whale-like color pattern; I always appreciate aquatic design principles being applied to flying creatures.

Another simple design; it’s just a worm, or maybe a snake, with huge insect-like mandibles and compound bug eyes. Kind of like a bobbit worm which are objectively horrifying, but this one lives on land. Sounds like a real nightmare of a pest.

A cute little horned purple dino-dragon. Their small size makes me think of them as mischievous and troublesome rather than outright destructive or evil, which is often what “devil” describes in a creature name.

Horrible. Probably inspired by the worms from Tremors, or perhaps the creatures from the first Half-Life (which came out around the same time as Well of Souls), this nasty little worm makes me afraid to know what exactly it parasitizes.

These guys show up with their mouths initially closed, and look like cute, bumbling, chubby little prey animals. And then they open their massive hinged snake-jaw, which opens BEYOND their beady little eyes. Awesome.

Yeah, it’s a killer ice cream cone. It’s ridiculous. It doesn’t make sense, there’s no in-game lore to explain it, it’s just an evil ice cream cone. For some reason this monster deeply disturbed me as a child, I’m thinking due to that sinister face and mean little narrow eyes.

These charming friends are actually only allies because they only appear as tameable pets. Leech monsters are pretty common, but I love the huge external heart that almost looks like a parasite in itself.

The abstractness of this tree monster is really cool. Also, the art style is totally different – the lineart is messy and chunky, unlike the other creatures. I love that the “head” is just a tangle of branches, which clutch at you like a mouth when it attacks.

I mentioned this in my review of pet site pets, but I really love cephalopods with shells. Those tiny eyes give it a sense of a larger scale than it actually is. 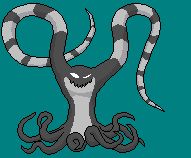 Easily my choice for favorite original monster design from Well of Souls. The Harleking is a Tim Burton-esque monster that somewhat evokes a spooky haunted tree – it has tentacles that can be read as either horns or arms or branches, a delightful little zig-zag snarling mouth, and then a tangle of root-like tentacles at its base. It’s EXCELLENT, simple, clean, and stands out immediately among its peers. 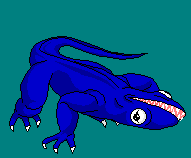 Sideways-mouth lizard! Not especially novel, but the expression sure is soulless and distressing, and when it’s bigger than your player character, pretty upsetting. 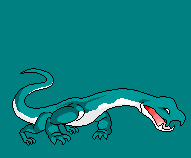 Another creature that only shows up as a tameable pet, the creatively named “Dragon” is another simple but appealing design. I like that it is neither a classic European or Asian dragon, and has an overall very serpentine appearance. I love the head shape, overall snake-like but with a massive mouth that opens beyond the eyeball, and those chubby little squamate reptile legs. 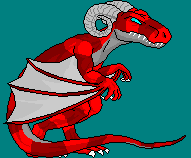 A fairly expected scary, red, devilish fire dragon. I don’t actually think I’ve seen a wyvern (if this can arguably called that) with a tyrannosaurus body before, which is actually quite a clever design choice, given the relationship between theropods and flighted birds. 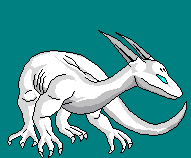 A really cool ice dragon design. Sleek and smooth, it evokes a whale, especially with those nostrils located ABOVE the eyes on the forehead, as if they were analogous to a whale’s blowhole! It periodically emits ice particles from the nostrils in-game. 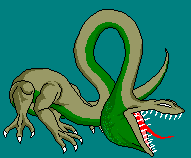 Oh man! It’s a swamp-dwelling dragon based on a gulper eel! Look at that malevolent expression, that huge throat-pouch, those muddy algae colors!

It’s ridiculous, but I love that super-long neck and giant head on that squat little toady body. I’m also a real sucker for “eyes forward of mouth” on creature designs, I find it very threatening and predatory (but it does usually make the creatures look kind of “dumb”). 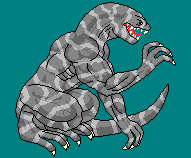 A very swole… dragon? Lizard-man? Dinosaur? I can’t really parse this creature’s anatomy because it’s so evocative of a human bodybuilder. What I really like is the ripple pattern markings, which resemble the reflections of light off water. I think these guys live in the Grotto, a high-level aquatic dungeon, so it actually makes a lot of sense that they look like they’re part of an underwater cave. 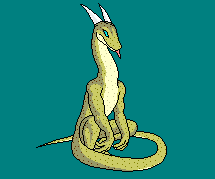 This image is PEAK nostalgia for me – I used to swap my player character avatar out for this creature, and so I immediately recognize this as “me” in a weird way. I love takes on desert dragons – I feel like they are more creative than a lot of the more standard “fire” and “ice” dragons. The bright turquoise eyes really stand out and read to me as both intelligent and mysterious when combined with the casual, nonchalant pose. 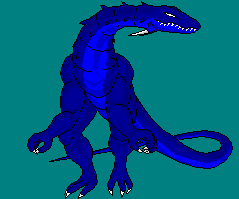 A big blue pointy fella. Not too much to say here, he’s threatening, he’s pointy, I like the visible teeth and the use of white eyes, teeth, spikes, and claws to offset the dark blue. 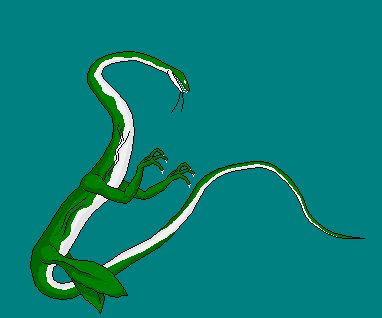 Almost like an anthropomorphic plesiosaur! I always, even as a kid, found the prominent neck vein kind of… suspicious… but I love the head shape and those little dangling catfish whiskers. It took me until adulthood to read the feet correctly – they are two flat paddles, NOT a single, super-buff digitigrade thigh with a weird flat paddle foot. 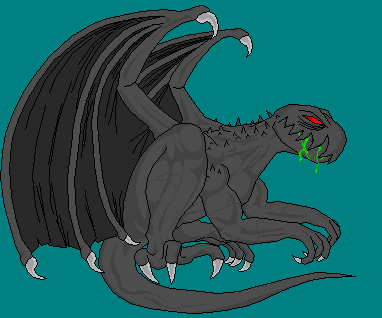 There he is, the legendary Black Wrath. Second only to the Goblin Catapult (exactly what it sounds like) in terms of experience point reward, these guys (which are, in game canon, merely weaker clones of the REAL Black Wrath, who never actually fights you…) were hunted relentlessly by higher-level players and the most desired target for “leveling” weak players (wherein they accompany a strong player to a fight to get a massive amount of experience). He’s not the most exciting design, just a sort of dragony, gargoyley devil-monster, but that weird green slime/blood on his mouth is certainly interesting, and the creepy little head with external teeth is pretty cool.

It feels important to mention again that Well of Souls is still available to download and play for free – you can even still play online, because there are still users hosting online games. It has never left alpha build, but it IS a complete game (sans final boss) AND an RPG game builder in itself.