“Dragon Quest VIII: Journey of the Cursed King” is a PS2 game that I inherited a copy of from a family member with no context or prior knowledge of the series. I hadn’t even really played a JRPG before – I know, madness. But Dragon Quest VIII ended up being a 130-something-hour adventure for me that I poured a lot of time into as a kid.

As I would quickly be disappointed to learn, many of the monsters are recolors of the same basic model. So for this Favorites article, I’m just going to display my favorite coloration of each model.

The characters and creatures in the Dragon Quest franchise are designed by Akira Toriyama, who also created Dragon Ball, Chrono Trigger, and Blue Dragon. Do you think he has a thing for dragons? 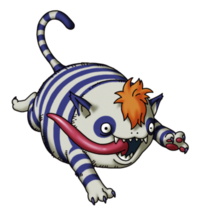 How are these demented goblins considered “cats”? I don’t care, it’s adorable and also terrible all at the same time. In-game, these creatures stand and stare at you with unfocused, unblinking eyes while their tongues undulate out of their mouths like a worm trying to escape. It’s a bit heartbreaking to kill them, really, because sometimes they waste a combat turn doing something cute and cat-like, like cleaning their own face or rolling around on the ground. 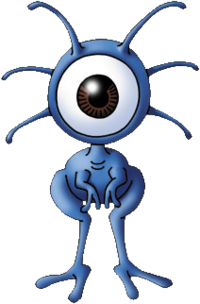 The idle animation of these little aliens is one of the cutest in the entire game. They turn their “heads” to each side repeatedly, like a dog being asked if he wants to go for a walk. I enjoy how alien these creatures are, since they really don’t resemble any other creature in the bestiary. If I recall correctly, they’re also completely silent – no squeals, no roars, no sounds at all. Eerie. 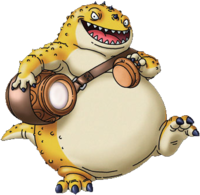 It’s a big round dragon with a jar. Jar-dragon. Jargon. Got it. I love the nubbly-textured leopard gecko skin and the fact that these smiley creatures choose to stand balancing on one leg. Now, here’s a complaint that I have about many “creature” designs – they have clothes. Now, it’s fine if a creature can have clothes, but I have a beef with creature designs that need to have clothes. The Jargon wouldn’t make any sense without their jar. It would just be a merry, chubby yellow dragon standing on one leg. What happens if a Jargon loses their jar? Is there a jar-distribution committee in their community? Do they make the jars? Listen, I want the lore on this pottery reptile.

I’ll try to keep quiet about the clothing complaint this time. Hell Hoppers are explained as a tiny, defenseless puffball creature that inhabits old shoes much the way a hermit crab inhabits shells. Cute! I’d love to see some variety among the shoes, just to really cement that they’re just taking what they can get, because unless someone is out there making and distributing identical spiked boots – sorry, sorry. Anyway, the Hell Hopper has a great color scheme, that icy blue fur and that piercing red eye, which makes it seem much more menacing than other, warmer recolors. I feel like the Hell Hopper does a good job of landing right on the line between cute and frightening. 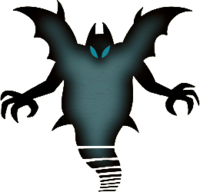 I’m pretty sure Shades (and their recolors) are the only two-dimensional monster in the game, which makes them immediately noticeable when they appear in battle. They’re animated like a cartoon, which is delightful. The overall shape of them isn’t very exciting, a winged, horned demonic humanoid, but I love that “tail” that breaks up into increasingly smaller segments, which undulates side-to-side like a snake as part of their idle animation. 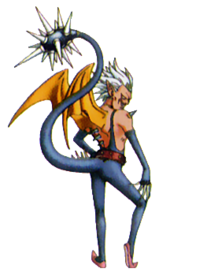 Okay, okay. I don’t usually consider humanoids to be monsters, so I’d typically not include this creature on the grounds that it’s clearly a RACE of winged, spike-tailed humanoids. But just. Just look at this guy. What you can’t appreciate from this concept art is the idle animation – he’s swinging/thrusting his hips out, back and forth, in the most supremely sassy of manners. It’s interesting because he appears to be wearing a… unitard, I think… except the material of the pants leads directly into his tail, which almost suggests that the clothing is a part of him, or that the tail is part of the clothing. Those little salmon-pink dancer shoes are also fun.

I love that this is a thorny vine-monster that is ALSO a dragon. Sounds like the climax of Sleeping Beauty got rolled into a single creature, which reminds me powerfully of the Heartless from the Kingdom Hearts series. I like that the Snapdragon is JUST vines – there’s no other elements in there, it’s just a tangle of vines that happens to resemble a dragon. 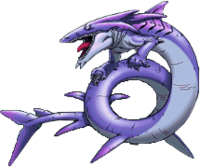 A good, solid leviathan with a boring name. I enjoy that the Sea Dragon is an elongated shark with arms, which is believable and cool-looking. That purple-pink ombre to the skin is surprisingly beautiful on this monster of the deep, which can shoot beams of concentrated light, a really neat power for an ocean creature. I love all the excessive fins and the almost tentacle-like fleshy spines on the head. 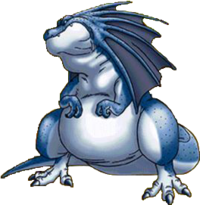 I’m fairly easy to please, and my tastes are fairly predictable. It’s a dragon/dinosaur monster, it’s blue, and it’s sassy. I like the idea of taking a small creature like a frill-necked lizard (or actually, it’s probably inspired by the Jurassic Park version of a dilophosaurus, which didn’t actually have a frill) and giving it the body shape of a massive tyrannosaur. The name “Frou-Frou” makes it sound snobbish and picky, which gives a lot of personality to an otherwise pretty standard chunky dragon.

Crocodiles and canines are a great combination. This thing looks absolutely sadistic, and it has the ability to levitate with no discernible means. That’s the sort of quality that takes a boring mish-mash animal and makes it really unique. I love that it has a “built in” spiked dog collar, and that the typical ridges of an alligator’s back are replaced with more of the same metallic, inorganic conical protrusions. The red “mane” is a really interesting addition and adds a lot of drama to this grinning beast. 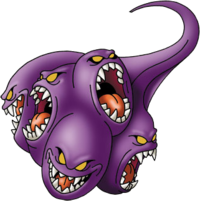 Simple, elegant! Mash five screaming demonic faces together on a purple blob and give it a wispy ghost tail! Look at all of their different expressions! Most distressingly, though, is that the purple blob-body moves with disturbingly solid, fleshy pulsing, and that “wispy ghost tail” whips back and forth like a flagellum, which takes it from “weird ghost” territory very suddenly into “very gross body horror” territory. 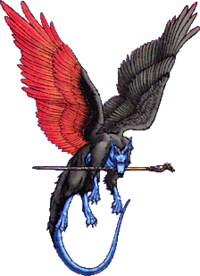 This creature is a fairly significant spoiler for the game’s overall plot. The main villain is capable of possessing any creature that comes into contact with the scepter in his mouth. Formerly a fluffy black pet dog, possibly an Irish Wolfhound, the villain mutated the pooch into a dramatic winged demon with black-and-red feathers and blue skin. I really enjoy the way the fur leads down into that serpentine tail, and the bird-like or even rat-like appearance of the half-furred feet.  Those big red wings are absolutely glorious, especially considering how many monsters in this series have tiny cartoon wings. His idle animation is beautiful, with those big majestic wings flapping and that tail whipping back and forth.

What are some other RPGs that have cool monsters?