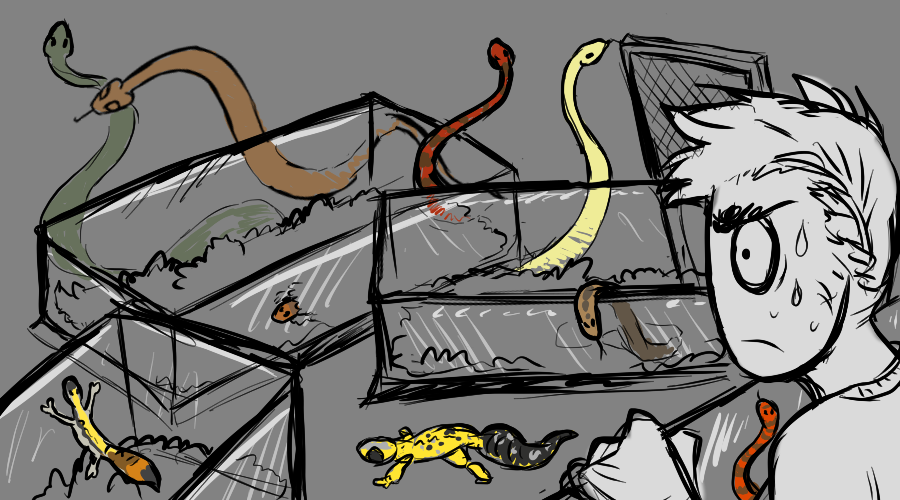 I’ve been wanting to start this series of posts for a while called “Dream Journal” where I detail and illustrate some of the more interesting things that I dream about. I’m someone with possible narcolepsy and a generally weird relationship with sleep, and I often have extremely vivid, night-long dreams with extremely specific and detailed events.

Let’s start this series off with one of my common, recurring dreams, and interestingly enough – it’s a dream that many of my friends and acquaintances have ALSO had!

This is the “Too Many Reptiles” dream.

In the dream, a seemingly endless number of various pet snakes, geckos, anoles, bearded dragons, skinks, and other reptiles emerge from the bedding of far-too-few and far-too-small terrariums. Some of the containers aren’t even proper terrariums. Some are Tupperware containers with holes in the lids, or no lids at all, as if I was preparing the reptiles for transportation. Species that should NEVER be near one another, let alone housed together, are in the same tanks. More and more keep emerging from the bedding of each tank.

I am frantically snatching them up, separating the reptile-eating species from the others before they can predate upon them, sometimes pulling individual snakes out of each other as they try to devour one another.

It’s enormously stressful; I’m desperately trying to keep all of these reptiles alive, but I don’t have enough containers to keep them safely separated or even contained. I’m picking them up and moving them around as fast as I can, but more keep emerging, and predator and prey species keep ending up together.

King snakes are going after baby corn snakes. Geckos are in danger from ball pythons. None of these animals have sufficient space from each other for their own well-being.

The dream never has a satisfying conclusion, it’s just an endless slog of panicked snake and lizard sorting.

Every reptile owner (former or current) that I have mentioned this to have also had some variation on this dream.

I suppose I do also have a less common “too many cats” dream, which features wrangling and capturing the cats to keep them safe, but it’s usually from a more immediate threat like a burning building. With the reptiles, it’s trying to keep them safe from each other and unhealthy living conditions.