When I wake up from one of these vivid, detailed, all-night-long dreams, I usually open my phone immediately and start typing up the details before they fade. Often dreams that compel me to document them are powerfully emotional or feel like they are of enormous significance. It’s like watching an amazing movie that no one else can ever see, and what a damn shame that is.

This is the dream I’ve called “Guiding the Light”..

A middle school-aged girl is walking through the halls of her brick school, taking a less-populated path to her next class. It is early afternoon; she is likely headed to her final class of the day. She does not want to deal with her peers. She is quiet and avoids conflict.

A strange adult is standing in the empty hall. She thinks they are a teacher, maybe from the connected high school. A terrible dread comes over her. They are standing still, in the dead center of the hall, facing her, but swaying and seemingly unfocused. She does not want to pass, and is afraid to speak to them.

A black cat darts out from behind the stranger., towards her. A cat? In the school? It trots quickly past her, hugging the wall, and stands beside the exit door at the end of the hall. Those exit doors are not really meant to be used, they automatically lock behind you, and students have been punished for leaving through them during the school day, or even to avoid the main traffic flow during the end of the day exodus. The cat looks at her expectantly, a strangely severe expression on its face.

The stranger wavers and starts to walk towards the girl, slowly and haltingly, a disjointed puppet on strings. She backs up in fear.

She runs to the door with the cat, hitting against the crash-bar with her whole body weight. The heavy door swings open into a gray late autumn day. The cat slips out with her, and keeps pace as she walks quickly, slowing about 10 feet from the door. She immediately feels stupid: she just skipped out of school in the middle of the day.. Now she would have to go to the front door and request re-entry at the front office, and would inevitably get in a lot of trouble for leaving the building.

She starts walking around towards the front of the building. The cat steps in front of her path. In a blink, it is 10 times larger. It is now a dragon, dark greenish-gray. It is the size of a large horse, but she is strangely not afraid.

The dragon can speak. It is blunt and unemotional. It tells the girl that she is a newly manifested Light-Bearer, and that there are many beings that want to take that Light… by capturing her, and likely inevitably killing her.

The dragon is her appointed guardian. It manifested at the exact same moment as she was chosen by the Light. It does not know where it came from, but it has instructions imprinted within its mind to protect and escort her across the country. They must avoid densely populated areas, because the Light within the girl will draw the attention of the evil forces, and cause them to possess people to get to her. The evil forces are only able to possess humans, usually those who are depressed or burnt out (this is described as having a “hole in their soul”, an emptiness that the possessing evil can fit into).

The dragon can take the form of a cat, a large dog, a crow, and a human. It has powers of persuasion and can compel humans to listen to it. However, the evil forces will also take notice of the dragon, even in its disguised forms, eventually. Their visits to populated areas must be brief – and if possible, the girl will NEVER be around other people. Her Light is extremely tempting, and even non-possessed people will begin to act strange and obsessive about her, and eventually become possessed.

Ideally, the girl will ride on the dragon’s back most of the way, but she is mortally afraid of heights.

The dragon can also create a “restful realm”, a small pocket dimension for sleeping safely. They make no progress on their cross-country journey while in this realm, and will exit from the exact same real-world location that they entered. The dragon likes to enter this realm from hard-to-reach places, like 20 feet in the air, or on top of tall buildings – if the girl is willing to be up that high.

The restful realm is a softly-lit, cloudy space with a pleasant, dry temperate and a slight breeze. Lights that resemble stars slowly twinkle in the artificial sky, and string lights made of the same formless light-orbs drape across the “ceiling”. It appears to be always in late afternoon light. The girl leaves her school backpack here. She often is reluctant to leave this space, but the dragon knows that the evil-possessed people will gather at the sparkling “scar” left in the air where they entered, and it will be a fight to escape and continue their journey. 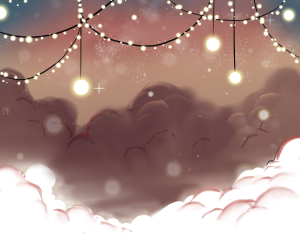 The dragon tries many times to convince the girl to ride on its back while it flies. They are much safer in the air, as the evil forces can only possess humans. The dragon does need to rest eventually, but it does not need to sleep or eat. It recovers quickly within the Restful Realm.

The girl still needs food, however. The dragon leaves the girl behind in quiet, forested places while it takes human form and goes into towns for food. It is able to use its persuasive powers to simply ask for food from fast food restaurants and is not asked for money in exchange.

The dragon is very, very apprehensive about leaving the girl behind. The girl grows tired of fast food quickly and asks for better quality food, but that would require waiting longer in a populated area, which draws attention from the evil forces.

The girl eventually agrees to ride upon the dragons back.. The dragon is eager to fly – they can cover much greater distance, and are safer – but the girl is terrified beyond coherence. They only make it about 30 feet in the air before she is screaming in terror and the dragon lands again. She tries to flee, telling the dragon she wants no part of this Light-Bearer situation. On her own, she tries to hitchhike, and is picked up by someone who is possessed by the evil forces. The driver brings her to a rural bridge underpass, where several possessed people gather around. By the time the girl realizes the danger, they have already pulled her into their own pocket dimension – a fleshy realm that resembles an enormous, veined esophagus. They try to drag her deeper into this tunnel, to feed her (and the Light within her) to their deity.

The dragon finds them, tears into this pocket realm, and rescues the girl. This act solidifies her trust in the dragon, but also brings her despair. She cannot escape this strange destiny.

Neither her nor the dragon know what must happen once they reach their destination. The dragon simply has a programmed goal in its mind, and that is all it knows. Keep her safe, get her to the destination. 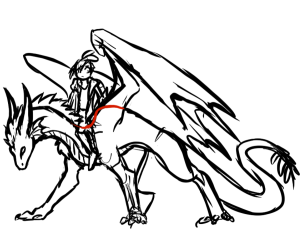 In the dream, the dragon slowly comes to have more empathy for the girl. It realizes that it is likely an aspect of her – everything from its body coloration to the appearance of its Restful Realm are based on the girl’s personal preferences and tastes.

It is perfectly designed to be her vehicle and protector. It has a seat-shaped notch in its shoulders for her to sit in. It has a soft fur mane on and around this seat, to provide her with warmth and relief from chafing against the dragon’s scales.

Unfortunately, I never saw the end of this story. I do not know what awaited them on the other side of the country. I last saw them in the midwestern United States, probably somewhere in southern Ohio. The dragon was getting fast food for the girl – she was thankful that there was a greater variety than in the Northeast, as she was very, very tired of eating McDonald’s.

I’ve definitely noticed a trend in my dreams of young female protagonists guided or escorted by a stern-but-caring magical creatures. You’ll see this theme come up often in my future dream journal posts..