In the late 1990’s and early 2000’s, the virtual pet adoption scene was booming. Neopets was king, Pokemon was new and exciting, and everyone was excited to build a website for the very first time now that it was finally becoming an accessible medium. Artists with all sorts of skill levels began to create “creature adoption” websites – places to share their original species with other enthusiasts of cute and unique fantasy animals.

The overwhelming majority of these homemade, non-professional sites featured adoptable dragons. Do you think I was complaining? I wasn’t. Everyone knew that the dragon-type pets on existing sites were the most coveted and popular. While I don’t know exactly who “started it”, virtual dragon adoptions began to appear everywhere I looked.

Google search wasn’t the robust giant it is today, and so you had to rely on webrings, Yahoo groups, and links to find some of these gems.

There are so many of these sites that I can’t even remember, lost to time. I recall one with a dark, painterly style, with a website that opened in a pop-up window (which blew my mind at the time). Another had an MS Paint pixelated style, with horse-like dragons that could have different numbers of legs or wings. Another had crystalline dragons that thrived on music.

For these artist-run home-grown “adoption sites”, there was no login, no accounts, no programmed gameplay. No, you had to engage in a sort of webpage-based roleplay.

You would create a webpage – often a free Freewebs, Geocities, or Angelfire account – and decorate it as if it were the creature’s home. Upload a background texture of rocks, or water, or clouds, write up a few paragraphs of information and introduction, and drop in some transparent GIFs of food, toys, or environment pieces. MIDI versions of anime music were very commonly auto-played – I heard the Spirited Away theme many times, and music from the anime Slayers. Many of these sites were connected in webrings, an way of linking sites together by theme that only really existed in the 90’s.

Often you had to fill out an application on the adoption website, to show off your hard work and prove you were ready to adopt one of their creatures. If the dragons were based on the Dragonriders of Pern book series, this would be called “Impressing” the dragon. Some of these websites were intensive, with many pages of narration or graphical displays. Sometimes there was a single page dedicated to one individual creature graphic, and sometimes people would crowd all their creatures onto a single page. Of course, a good adopter would link back to the adoption agency’s website, so that other people could get their own creature. You would find text warnings about how to not steal bandwidth from other sites, or why you shouldn’t steal graphics (“no sticky paws”/”no sticky claws” was accepted terminology).

Some of the really active sites would provide “growth” for your creatures – after a certain number of days, you would be sent an updated graphic of your creature in a new phase of life (at your Yahoo or Hotmail email address, naturally).

And there were lots of these sites – both adoption agencies, and display pages for already-adopted creatures.

UPDATE: I have compiled a MASSIVE list of adoption agencies and some adoptee display pages here.

For your viewing pleasure, I have scoured the WayBack machine to bring you this sampling of virtual adoptable dragon graphics, mostly from 2001-2008.

As you may notice, not all of the art is very well-developed. Remember that there were severe limitations on available art programs at this time, and many web servers couldn’t handle large images, so the quality often was scaled back in favor of transparent backgrounds. But also, even in the cases of under-developed art, this was a very accepting and welcoming community. The highly-skilled artists were in high regard, yes, but there wasn’t a monopoly or any kind of trash-talking the “lesser” adoption sites.

Custom adoptables were also a subcultures within Neopets – popular artists with famous pets (Atriyuu, korbynum1, Dragizi) would recolor small custom graphics to resemble your own pet, if they liked your character enough. These were expected to be displayed on your existing Neopet description or petpage. “Adoptables” are still very much a thing, especially among the furry art community, but these vintage custom graphics could not be purchased – they had to be hard-earned through notoriety and respect.

Somewhere in the mix was a game/screensaver application called AniDragon. I was absolutely obsessed with it – and it wasn’t even a game, just a screensaver depicting a 3D virtual dragon that wandered around a floating island, eating fruit and chasing tiny gremlin monsters. There were a few other “care for a dragon” games out there, lost to time, but they simply featured a lifeless character who stared at you until you fed it. AniDragons moved around! They ran, they explored, and you got to go on this journey with them! That was the kind of interactivity I wanted – I didn’t want to sit there and manage hunger and energy levels for an empty character, I wanted to go on a journey with them, to see what they saw, and be fully immersed in their world. AniDragon vanished after a short while, and never even got a proper launch, but the ghost of it still lingers in the back of my mind as a source of inspiration. 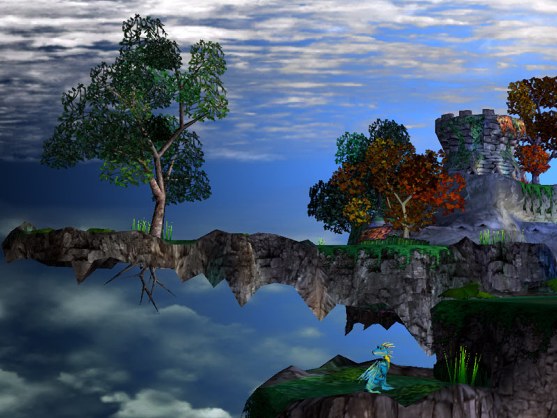 A screencap from “AniDragon”, a screensaver/game featuring a 3D dragon exploring a fantasy world.

UPDATE: After much digging in the Wayback Machine, downloading a Flash SWF debugging tool, and a GIF recorder, I was able to find and share with you this GIF of the animated AniDragon homepage:

… and from the website, this screenshot of an infant “Aurora” dragon: 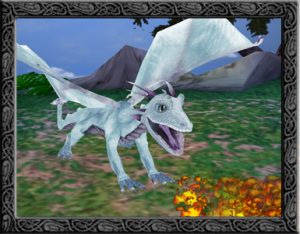 I was tremendously excited to find even more from this lost piece of internet dragon adoption history and even more excited to share it with you folks!

I had to make my own virtual dragon adoption site.

I started off with Freewebs websites – at the time, they allowed custom HTML and I thought I was very cool for being able to do basic HTML. I made my dragon art in MS Paint, and later on Macromedia Fireworks, to animate them blinking. Present-day me would pay a lot of money to recover my artwork from this era of my life. I’m sure it’s all just terrible.

My first attempt was a Freewebs site called Dragon AdoptionsD (freewebs.com/dragonadoptions was already taken, so I threw the letter ‘D’ on there, because I was a kid). I drew MSPaint dragons and advertised on the Neopets forums. I had takers! At least a dozen free webpages were created specifically to host my dumb dragon artwork.

Next, a better Freewebs site: Silver Cascade. Featuring stolen waterfall photography as a splash screen, I really pushed my HTML and newfound CSS knowledge to its limit. My art was better, too! I created a custom graphical navigation menu, narrative introduction text, and I had more than just dragons. I had accessories. I made snacks, like bowls of popcorn, slices of cake, and fancy drinks in dragon-friendly ergonomic drinking bowls. I made decorative effects and environmental pieces like grass and flowers, so that even MORE of my own artwork could go on a given webpage. I had a caretaker character who spoke to the reader. I was living the high life.

And then came Furcadia. My first real custom world (or “Dream”) was The Dragon Adoption Center, a place where people could come and actually peruse the available dragons, who were ALSO real players. Now I had created an asymmetrical multiplayer experience – the dragons could do some things, the adopters could do different things. They could engage in caretaking, like baths and feeding and medical care. They could play games together. Unfortunately, these roleplay relationships were shorter-lived than I hoped – people generally would “adopt” a dragon and be done with them in less than an hour before adopting a new one. Or the dragons themselves would switch back to being adopters, wanting to experience both sides of it

I tried a few more times to re-create the Dragon Adoption Center on Furcadia, but none were as successful as the first. I even had some copycat Dreams show up, inspired by my creation! “Baby Dragon Build-a-Home”, “Dragons and Cuddling”,  and “Mythical Adoption Center” are names that I vaguely recall with a smug sense of superiority over. I wish I still had screencaps of that original Dream! Alas, all I have are a few vintage pixel art assets I created for it:

So, I guess, here we are. I still draw cute, graphical dragons with transparent backgrounds. I still crave virtual pet sites. I’m so glad that Flight Rising now exists to satisfy the desire for an adoption site that’s just for dragons, but I still crave the idea of exploration, survival, and pet caretaking with dragons.

Maybe one day I’ll have the skills to make my own cute dragon adoption game and help some other kids experience something that brought me so much joy and inspiration.

If you want to really go down a rabbit hole, I have a page here of archived (and some live!) links to dragon adoption websites.