I played Furcadia for years under the username “Kiamura”. Originally, the character didn’t have much of their own personality, and was just a furry version of myself.

Created on 4/15/2004, with a whopping 336 cumulative days spent in Furcadia, Kiamura originally went by she/her pronouns but always preferred to be called “sir” and “gentleman”. At first, they were just a grey cat, and then a black cat with glowing markings. They always had a sort of tribal/rave theme, never wearing a shirt (they never had breasts) but often sporting baggy Tripp-style jeans and a necklace with either a glowstick or a glowing crystal pendant.

Once Kiamura began to develop their own personality and be a character separate from my 13-year-old self. They gained some magical power, like the ability to “light paint”, or draw in midair with glowing streams of colored light, and also the ability to summon and sit upon small clouds.

Eventually, I decided on two separate forms for them – one during the day, with silver-grey fur, and one during the night, with black fur and a skull motif. The latter appeared to have a wide grin due to the bone designs of their teeth, and so I decided that Kiamura’s official species was a “Cheshire Cat”, from Alice’s Adventures in Wonderland. I guess that technically makes them a British Shorthair? 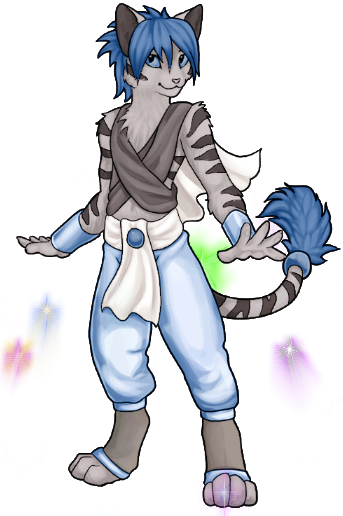 I made a large number of free downloadable patches for Furcadia as Kiamura. Hosted on “freewebs.com/kiamura” (long-since shut down), I provided the Furcadia community with objects such as chairs, pillows, plants, and waterscaping features. 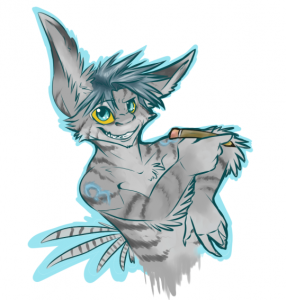 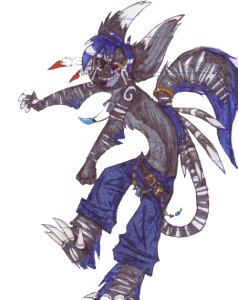 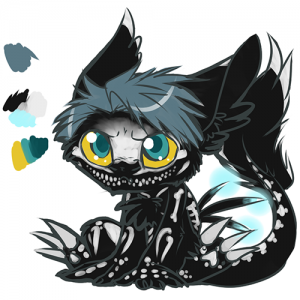 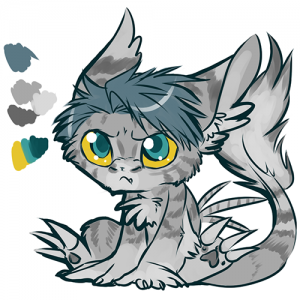