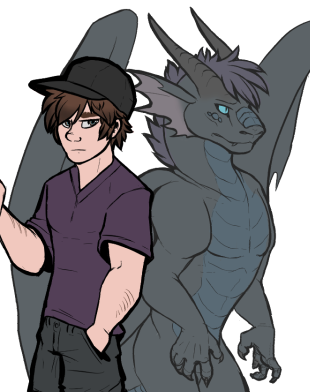 Kay is our first-person protagonist – a depressed millennial who already feels like his life is over. He was born in 1995, the same year that Aether began to leak into our world.

Kay really just wants other people to tell him what to do with his career, his school, and everything else. He hates making decisions and feels tremendous anxiety at the idea of choosing his own path, and constantly self-doubts about whether something was the “right” decision.

He would love it if some amazing, clear, and obvious destiny would simply magically appear in front of him.

Raised by a loving but overprotective single dad, Kay moved to Cincinnati to make a halfhearted attempt at developing independence. He works as an office assistant doing data entry and making phone calls.

His favorite color is purple. His favorite music is acoustic rock. He’s a Libra but doesn’t care about astrology.

A dragon who is known for her ability to remove the Pearls from other dragons, causing them to experience Aether overload and become monsters. She describes her motivations as a desire to free others from the curse of being “trapped as a demon”.

An older man who has been a dragon for many years.

An older man who has been a dragon for many years.

A proactive, hot-shot dragon boy who fits the bill of “hero” better than anyone could ever hope to.

A strange hermit who lives exclusively as a dragon, rejecting their human form. They live deep in the woods, hunting and living essentially as a wild animal.

A dragon whose Pearl was shattered by Luisa several years ago, who plagues the Stone Shield with mindless violence and requires constant supervision to prevent. them from causing excessive destruction.

A scientist working in Aether studies, who understands the physics and mechanics of Aether flow and dragon’s Pearls. Bubbly and excitable, she loves bright sparkly candy